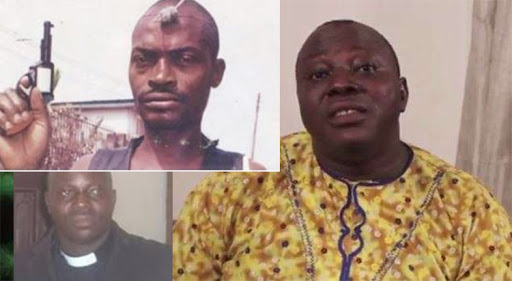 One of Nigeria’s most wanted criminal, Shina Rambo, is back and currently in Ado Ekiti, the Ekiti capital, claiming that he is now a changed man working for God as a preacher of the gospel of Christ.

He spoke on Sunday night on a weekend Yoruba programme on a radio station in Ado Ekiti, and anchored personally by prominent ace gospel musician,Yinka Ayefele.

Rambo, who gave his real name as Oluwasina Oluwagbemiga, confessed to being the same person whose gang terrorised some parts of the country for years and tormented innocent citizens with attacks, killings and maiming.

He said so many people, especially the police, would be surprised to hear that the same man they claimed to have killed on a number of occasions was still alive today claiming that he was now a complete child of God preaching the gospel in prisons and other reform centres, Rambo, who gave 1958 as his year of birth, said he was born as a native of Abeokuta, the Ogun State capital, but was raised in Benin city.

Rambo expressed regret over his roles in a series of deadly crimes that held the country spellbound for years, claiming that he was misguided by evil spirits.He said the moment he accepted Christ, he realized he had no more occult powers as the spirit of God suddenly descended on him directing him to drop all his bad habits and start preaching about God.

He urged the criminally minded to turn over a new leave in record time and have a change of heart so as to receive divine salvation as well as avoid incurring God’s wrath.