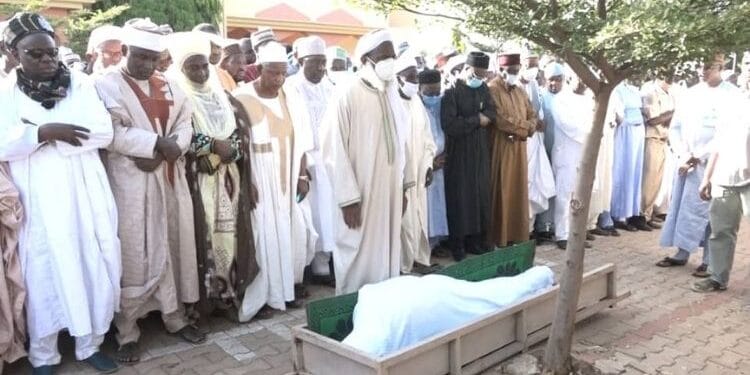 The remains of second Republic Governor of Kaduna state, Alhaji Abdulkadir Balarabe Musa has been laid to rest in Kaduna.

The burial was preceded by a funeral prayer led by Sheikh Ahmed Gumi at Sultan Bello Central Mosque, Kaduna.

The Sultan Bello Mosque open ground was filled with people from within and outside the Kaduna metropolis who came to pay their last respect to the one who has been described as the defender and voice of the masses.

The funeral prayer conducted immediately after the Asri (early evening prayer), was also attended by two former Governors, Ahmed Mohammed Makarfi and Mukhtar Ramalan Yero while the incumbent Governor Nasir El-Rufai who was said to have travelled out of the country, was represented by the Secretary to the State Government (SSG), Balarabe Abbas Lawal.

The body was then moved to the Ungwar Sarki cemetery, in a Kaduna state government ambulance with number KDGH 13, where the former Governor of old Kaduna state was laid to rest.

The trip from Sultan Bello Mosque to the Ungwar Sarki cemetery a distance of three km took over 20 minutes, as residents in large numbers trooped to bid Balarabe Musa final respect, amidst a horde of vehicles which meandered their way to the venue of the final interment.

Balarabe Musa, a left-wing Nigerian politician, was elected Governor of the then Kaduna state (comprising Kaduna and Katsina states) during the Nigerian second republic on the platform of PRP with a socialist ideology that believes in welfare of the common man, the poor.

He held office from October 1979 until he was impeached by the then National Party of Nigeria (NPN) dominated Kaduna State House of Assembly on 23 June 1981.

Speaking to journalists shortly after the prayer, former Governor Ramalan Yero described as a politician with integrity, whose virtues should be emulated by the current crop of leaders.

He said Balarabe Musa demonstrated that leadership and politics are about people.

“What we the current crop of leaders must learn from him is his honestly and consistence in life. If you look at the politicians of today, they keep jumping from one political party to the other seeking position. But, if you look at Balarabe Musa, since 1981 when he was impeached as Governor, he never left his PRP until his death.

“He worked tirelessly for the progress and development of Kaduna state, northern Nigeria and Nigeria as a whole. So, his death is a big loss to our state, region and country at large,” Yero said.