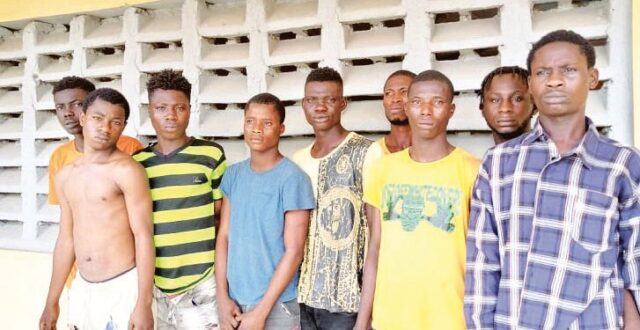 Operatives of the Lagos State Police Command have arrested 13 suspected cultists alleged to have wreaked havoc in the Mushin and Ikorodu areas of the state.

While nine of the suspects were apprehended around 12:15pm Tuesday at Ikorodu, four were picked up about 10pm on Monday during a street disturbance at Moroluke/Wey Street, Mushin.

A statement by police spokesman, Olumuyiwa Adejobi, said their arrests followed the marching orders given to Area Commanders, Divisional Police Officers (DPOs) and Heads of Departments by Commissioner, Hakeem Odumosu.

He said the police boss charged them to rid the state of cultists and hoodlums known to threaten peace and security.

“The Commissioner of Police, Lagos State, CP Hakeem Odumosu gave the marching orders recently to the Area Commanders, Divisional Police Officers and Heads of Department via Police Wireless Message that miscreants, cultists and hoodlums be smoked out of their hideouts, arrested and prosecuted accordingly.

READ  Church Member Accuses His Own Pastor Of Defrauded Him Of N700,000 In Ekiti
Share this Post[?]