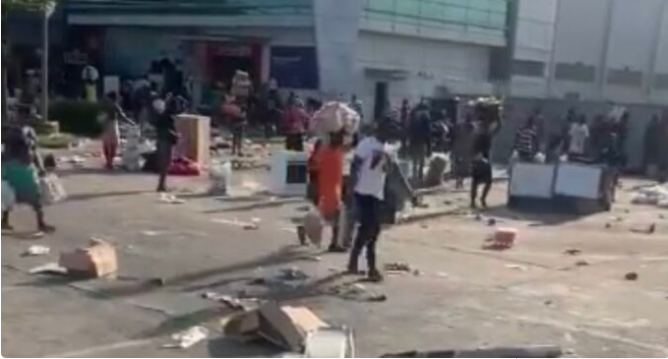 Brigadier General of 81 military intelligence, Ahmed Taiwo on Saturday stated that some mothers took their children to loot a SPAR outlet in Lagos during the crisis that trailed the #EndSARS protest.

This statement was made by the brigadier general who spoke on the role of the army in restoring order while testifying before the Lagos judicial panel of inquiry and restitution on Saturday.

“They (hoodlums) burnt places like Shoprite and SPAR in Lekki,” he said.

“I was on ground for this, and what hurt me the most was that, women and men, children, mothers were even taking their children to loot.”

The army general disclosed that the MD of Spar begged him to let them loot the SPAR outlet but not set it on fire.

Some suspected hoodlums took advantage of the #EndSARS protests to vandalise and loot public and private properties in Lagos.

Ahmed also said the army was able to recover some of the looted goods and returned them to their owners after they provided proof of ownership.

SPAR had tweeted about the incident which happened less that 24 hours after the shooting at Lekki tollgate.

Our Lekki store has been vandalized and looted. But, we acknowledge that this is only a setback compared to the larger issues we are all facing as a nation, and our thoughts and prayers remain with Nigerians everywhere, and for a peaceful resolution to various issues at hand.