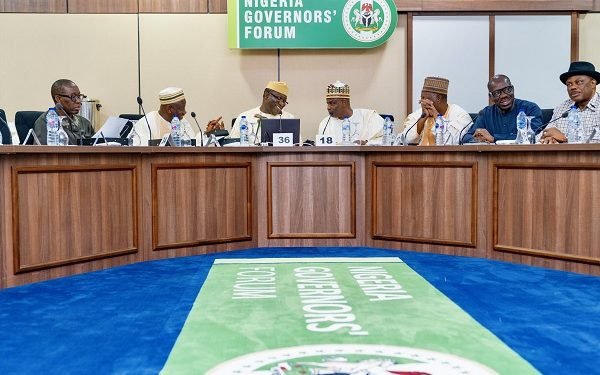 State governors have requested that the federal government and the Academic Staff Union of Universities (ASUU) to shift grounds and resolved their differences owing to the shutdown of the nation’s universities for about eight months.

The state governors are appealing to the Federal Government to create a temporary salary payment window pending the outcome of the ongoing testing of the University Transparency and Accountability Solution (UTAS), recommended by ASUU.

The governors have met with some past leaders of ASUU on how to end the strike on mutual terms.

Recall that the Academic Staff Union of Universities (ASUU) has been on strike since March 23, leading to a near loss of 2019/2020 academic session.

The nation’s varsities may also record admission backlogs, should the crisis persist beyond December.

Findings revealed that the governors are disturbed by the consequences of the continued closure of the universities on the future of younger generation.

The governors felt the deadlock in talks between ASUU and the Federal Government was amenable.

It was also gathered that the governors felt they could fill in the gaps between the two parties without bruising any side.

A source, who was in the know of the intervention, said they identified the row over IPPIS as compounding the negotiation with ASUU.

The source said: “The governors have met behind-the-scene with all the ministers either involved or connected with the negotiation with ASUU.

“During a session with the Minister of Finance, Budget and National Planning, Hajiya Zainab Shamsuna Ahmed, the governors’ representatives asked the Federal Government to create a temporary salary payment window which can be a stop-gap between IPPIS and UTAS.

“They said the temporary payment modality will subsist until UTAS or any other payment is agreed upon by both parties. They said the nation cannot afford to continue to shut down its varsities endlessly.”

A governor told our correspondent: “We have reached out to past and present ASUU leaders to put the interest of the nation above personal desires.

“Our main message to all the parties is to shift grounds on all the issues at the negotiation table.

“The two sides need to face the reality of the economic challenges at hand and accommodate all issues within the nation’s capacity. We believe, there are quick win demands of ASUU and there are long-term ones. But with sincere dialogue, the Federal Government and ASUU can reach amicable agreement.”

The conciliator between the two parties, Minister of Labour and Employment Dr. Chris Ngige, last week said the Federal Government had tried its best to meet the demands of ASUU.

Ngige said only three things needed to be resolved.

He listed the additional concessions given to ASUU as follows:

Receipt of ASUU’s University Transparency and Accountability Solution (UTAS) salary payment proposal and presentation to NITDA for verification
Readiness of the government to pay N40b for Earned Allowances for ASUU members, other unions
FG to set up visitation panels for all universities
The FG-ASUU renegotiation team likely for inauguration.
N20billion for the revitalization of universities.