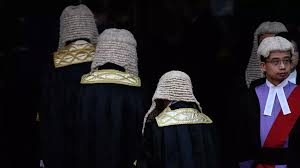 Semi-autonomous Hong Kong owes much of its success to a transparent and internationally respected common law legal system that stands in stark contrast with the opaque, party-controlled courts in authoritarian China.

But following months of pro-democracy protests last year, Beijing has cracked down on dissent and ramped up direct oversight in the city.

On Tuesday a veteran official in charge of Beijing’s Hong Kong policy said it was time to re-examine how the judiciary operated.

“Even in Western countries, judicial systems have to catch up with the times and reform constantly,” Zhang Xiaoming, deputy head of the Hong Kong and Macau Affairs Office, said in a speech marking the 30th anniversary of Hong Kong’s mini-constitution.

“This does not affect judicial independence,” he insisted.

Zhang did not give any specifics on what path such reform should take.

But he did name-check Henry Litton, a retired senior judge who has written multiple columns in recent months critical of Hong Kong’s judiciary.

“Such a rational voice from a person inside the trade should be valued by the whole society, in particular the judiciary and the legal community,” Zhang said.

Litton, who served on Hong Kong’s Court of Final Appeal from 1997 to 2015, has been celebrated by Beijing’s state media as a voice calling for an overhaul of the city’s judicial system.

He was highly critical of a ruling during last year’s protests when senior judges struck down an order banning face masks, as well as other judicial reviews by democracy supporters.

READ  7 Things To Know About Kim Yo-jong, Who Could Succeed Kim Jong-un In The Event Of Death

He has also called for Hong Kong’s judges to “regain Beijing’s trust” and claimed courts “have subordinated the common good to the assertions of personal right”.

Dozens of protester acquittals -– often accompanied by withering court criticism of police –- have triggered a growing backlash from Beijing loyalists.

Beijing has dramatically altered its relationship with Hong Kong since last year’s protests.

In June, it bypassed Hong Kong’s legislature to impose a sweeping national security law which outlawed the expression of certain political views.

Beijing also toppled the judicial firewall between the two, awarding itself power over especially serious national security cases and allowing its security services to operate openly in the city for the first time.

Last week Hong Kong authorities ousted four lawmakers after China’s top lawmaking body said any legislator deemed a threat to national security could be removed without going through the courts.

In response, 15 other pro-democracy lawmakers resigned en masse, reducing the legislature to a gathering of Beijing loyalists.

In Tuesday’s speech, Zhang hailed the removal of the legislators.

“Patriots rule, anti-China trouble-rousers out is a political rule… Now it has also become a legal norm,” he said.