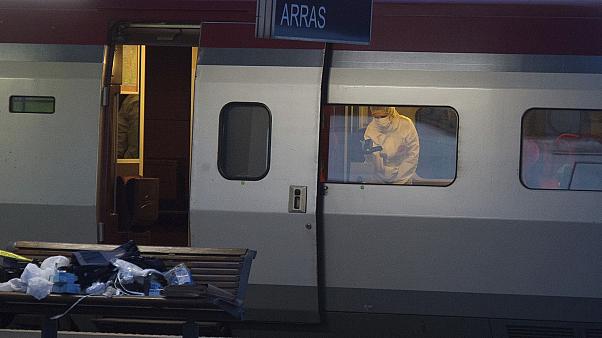 Four men went on trial in Paris on Monday over a foiled terrorist attack on board a high-speed international train in the summer of 2015.

Ayoub El-Khazzani stands accused of opening fire on a Thalys train travelling from Amsterdam to Paris in August 2015, three months before the Paris terror attacks on November 13.

Two people were wounded in the attack before the shooter was subdued by three American passengers, two of whom were soldiers.

Three others are on trial suspected of helping El-Khazzani plan the attack. Bilal Chatra, Redouane El-Amrani Ezzerrifi and Mohamed Bakkali face lesser charges, including conspiring with terrorists and accomplices to attempted murder.

If found guilty, El-Khazzani could face a life sentence over charges of attempted murder and conspiracy to commit a terrorist act.

El-Khazzani is believed to have joined the so-called Islamic State group in Syria in May 2015. That summer, he set off for Europe from Turkey with his sponsor, Abdelhamid Abaaoud, who led the jihadist cell in Belgium that planned the Paris attacks on November 13.

According to the investigators, the Thalys attack was part of a series of jihadist attacks planned from Syria: the aborted attack against a church in Villejuif in the Paris suburbs which was perpetrated in April 2015 by Sid-Ahmed Ghlam who was also recently sentenced to life imprisonment, the November attacks in Paris and those of March 22, 2016, in Brussels.

On August 21, 2015, El-Khazzani, then 25 years old, boarded the Amsterdam-Paris train in Brussels. He went to the toilet, took off his shirt, put a pistol in his belt and a Kalashnikov across his shoulder.

Three American tourists were alerted by a commotion when passengers opened the toilet door and disturbed him. They managed to throw themselves on him, disarm him and overpower him with the help of other passengers. The train then stopped at Arras station in France where the attacker was arrested.

“He had enough ammunition to kill 300 people,” insisted lawyer Thibault de Montbrial, who is representing the Americans, adding he didn’t doubt a “mass attack” had been avoided.

After keeping his silence for over a year and a half, El-Khazzani told investigators that Abaaoud, killed by the police shortly after the November 13 attacks, had asked him to target only Americans citizens.

El-Khazzani’s assertions were deemed “not serious” by the team investigating the attack as Abaaoud was at that time preparing the November attacks against civilians. The presence of the Americans on this train was also believed to be impossible to anticipate.

The Americans, now 28 years old, will be present at the hearing on Thursday and Friday, when the testimonies of the passengers on the train are scheduled to be heard, their lawyer told the court.

The three men were celebrated as heroes in France, receiving the Legion of Honour at the Elysée Palace for their actions.

The trial, which is due to last until December 17, opens against a backdrop of a high terrorist threat after a succession of attacks in the last month in which a teacher was beheaded in Paris and three people were stabbed to death at the Notre Dame basilica in Nice.