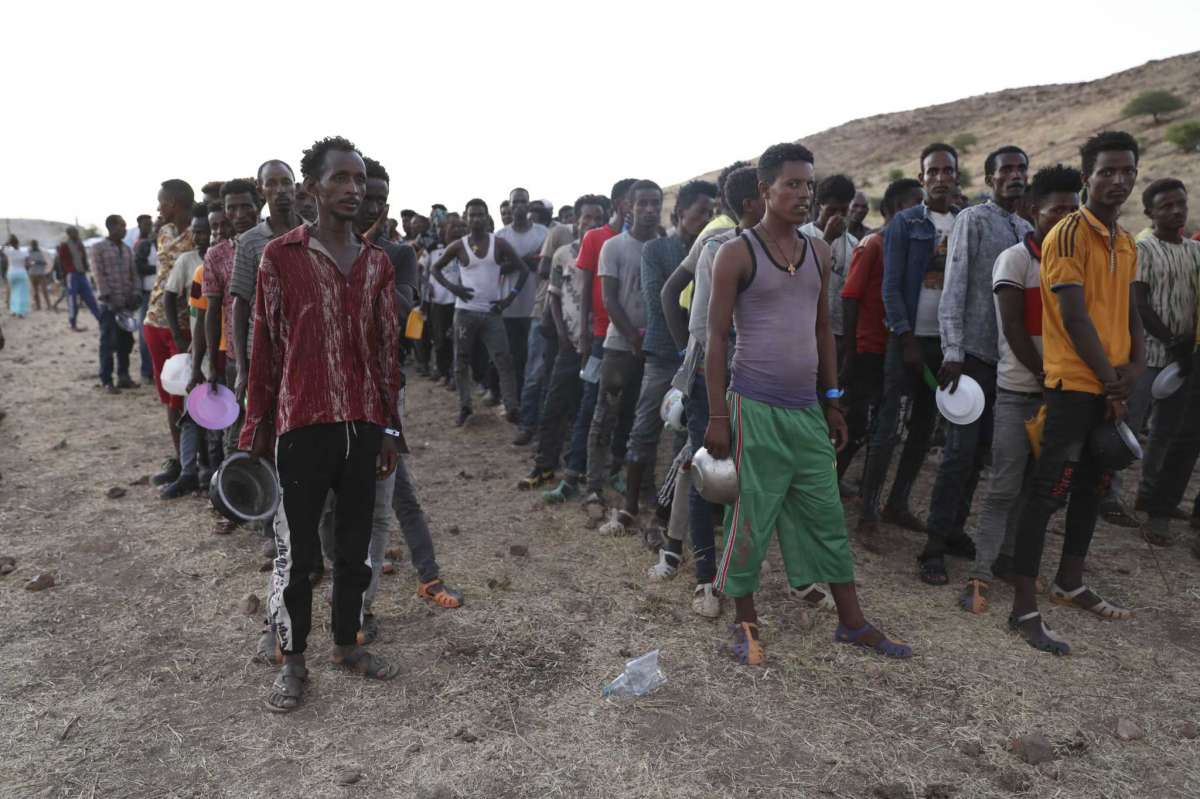 People are going hungry in Ethiopia’s rebellious northern Tigray region as roads are blocked, airports are closed and the federal government marches on its capital in a final push to win a two-week war.

“At this stage there is simply very little left, even if you have money,” according to an internal assessment by one humanitarian group, seen by The Associated Press. The assessment, based on a colleague who managed to get out, said people “will stay where they are, there is no place in Tigray where the situation is any different and they cannot cross over into the other regions of Ethiopia because of fear of what would be done to them.”

They expect to be killed, the assessment said.

For more than a week, the United Nations and other aid organisations have been warning of disaster. Long lines formed outside shops within days of the Nov. 4 announcement by Ethiopia’s Nobel Peace Prize-winning Prime Minister Abiy Ahmed that a military offensive had begun in response to an attack by Tigray regional forces on a military base.

Trucks laden with food, fuel and medical supplies have been stuck outside the region’s borders. Banks in Tigray were closed for days, cutting off humanitarian cash transfers to some 1 million people. And even before the fighting, a locust outbreak had been destroying crops.

Over 27,000 Ethiopians have fled into neighboring Sudan, burdening villages that have been praised for their generosity, though they have little to give.

But many inside Tigray can’t or won’t leave, frightened by the threat of ethnic violence. Abiy’s office on Wednesday tried to ease those fears, saying in a statement that its “law enforcement operation” against a Tigray regional leadership it regards as illegal is “primarily” targeting members of that ruling circle.

“The people of Tigray will be the first to benefit” from the operation, the statement said, as senior government officials vow its completion within days.

But Ethiopia’s federal government has been promising a rapid end to the fighting from nearly the start. And humanitarian groups, experts and even the United States government are showing signs of desperation.

“We do not know if there will be additional U.N.-coordinated relocation efforts out of Tigray,” the U.S. Embassy said in a brief statement Tuesday. “U.S. citizens who cannot depart Tigray safely are advised to shelter in place.”

Well over 1,000 citizens of the U.S. and other countries have been said to be trapped, along with the bulk of the Tigray region’s some 6 million residents.

“Humanitarian workers should be given safe passage to provide assistance to vulnerable groups,” U.S. Secretary of State Mike Pompeo said in a statement overnight. “Communications services in the Tigray region should be restored immediately in part to allow independent reporting on the situation and to allow for communication with civilians, including U.S. nationals.”

U.N. humanitarian chief Mark Lowcock said in a separate statement, “I call for full access to reach people in need wherever they are; safe passage for civilians seeking assistance; and the security of aid workers.” Even before the conflict almost 1 million in the Tigray region needed humanitarian assistance, he said, along with millions more near its borders.

His office on Tuesday set aside $20 million (€16.8 million) “or anticipatory action to fight hunger in Ethiopia,” citing a long list of threats in the country, including “civil unrest, growing insecurity, locust infestations, and the economic fallout of the COVID-19 pandemic, which includes declining incomes and rising inflation.”

READ  Herdsmen: Tinubu Silent Because He Does Not Want To Offend Buhari - Adebanjo

Even famine is a possibility in the Tigray region, researchers warn in a new article published by The Conversation. Some 80% of the people in Tigray are subsistence farmers and the fighting affects the upcoming harvest season, they wrote.

And the locust outbreak, the region’s worst in decades, has “destroyed vast areas of cropped land and numerous swarms remain active in northeastern Ethiopia, where Tigray is located.”

The locust outbreak is so serious that even neighboring Eritrea, which has been almost silent on the conflict despite the Tigray forces firing rockets at it capital, speaks relatively openly about the insect invasion.

The split between Ethiopia’s federal government and Tigray’s — each now regards the other as illegal — has included the federal government’s move to divert funding from the regional government to local administrations, affecting early-warning systems for hunger, the researchers wrote in The Conversation.

This time of year was already the “hunger gap” for many, they said: “We fear that the grain baskets will remain empty because of the conflict.”