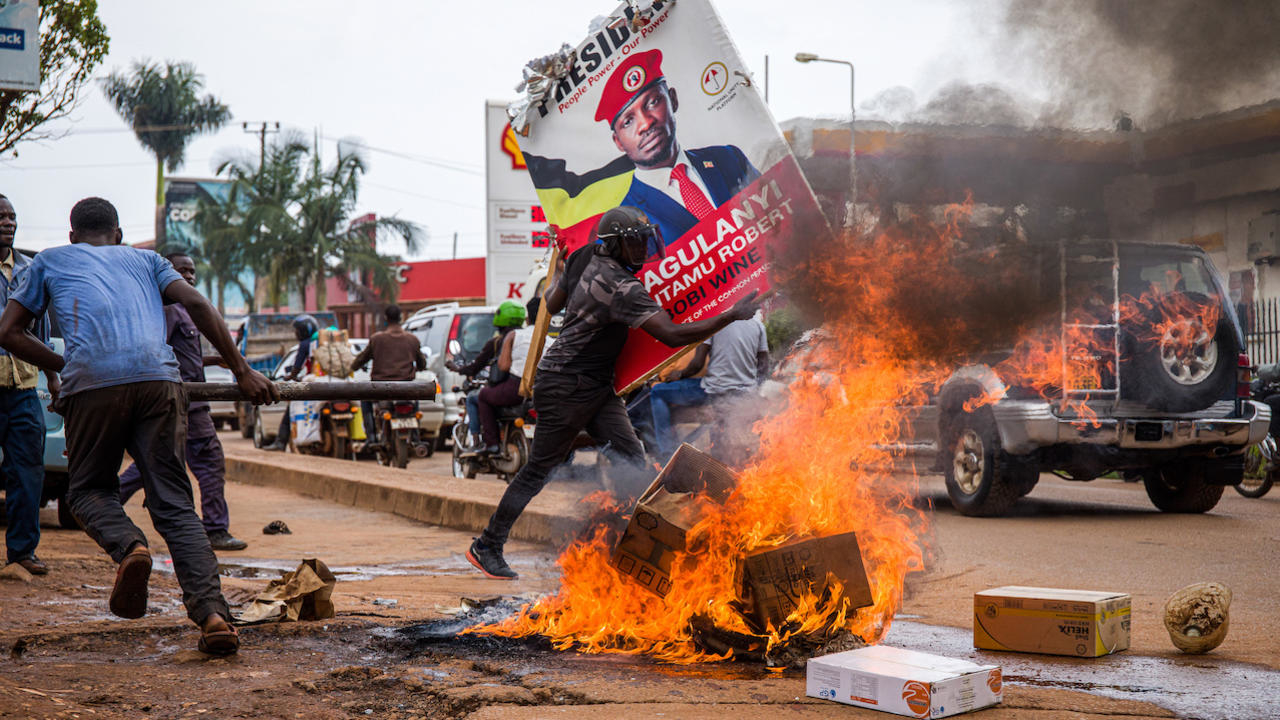 Ugandan security forces fired teargas and rubber bullets at angry protesters who set fires, barricaded roads and looted stores in the capital Kampala, as calls mounted for calm ahead of the January 14 elections.

The popstar-turned-presidential candidate Bobi Wine, whose real name is Robert Kyagulanyi, was still in detention after being arrested on Wednesday for allegedly violating coronavirus measures at his rallies, over the large crowds attending.

“The death toll is now 16, with 45 injuries, some serious injuries,” Kampala police chief Moses Kafeero told AFP, without giving details of those killed.

“About 350 people have been arrested for participating in violent acts including looting, destruction of property, traffic disruption, theft and robberies during the riots,” he added.

Protests kicked off on Wednesday, when police said seven were killed, after Wine’s detention ahead of a rally. Wine is considered the main challenger to veteran president Yoweri Museveni who is seeking a sixth term in power.

Pockets of protests continued throughout the day in Kampala and other major towns, with youths barricading roads, starting fires and engaging in running battles with police who lobbed tear gas and fired rubber bullets at protesters, and in some cases, fired live bullets.

Kampala on fire, following the arrest, in Luuka, of presidential candidate Hon Robert Kyagulanyi (BOBI Wine). The protests are spreading quickly to other urban centres.

Many people have, reportedly, been short dead by the Police and Military in various parts of the city. pic.twitter.com/EFSZAdZfx2

READ  ‘Is It Because He Patronises Your Hospitals?’ – Group Shades UK For Congratulating Buhari

The Red Cross said late Wednesday it had treated dozens of injured following “scuffles involving the police and the rioting masses”, including 11 people for gunshot wounds.

While the military and police maintained a heavy presence, by the evening the situation had deteriorated with robberies taking place and shops being looted.

An AFP journalist saw hooded men stopping vehicles in a suburb of Kampala, and robbing passengers before police opened fire on the perpetrators.

“My phone, money and handbag has been taken,” said 42-year-old Flavia Namutebi, a Kampala businesswoman who was in a taxi that was robbed.

“They said they want money to bail out Bobi Wine,” she said.

Another man identified as Ivan Kakawa, 29, a shoe seller, told AFP, “the men beat me and demanded I give them money.”

Uganda’s judiciary issued a statement saying a courthouse in the central town of Wobulenzi, about 40 kilometres (25 miles) north of Kampala had been vandalised by protesters.

The old vs the new

Wine, 38, has long been a thorn in Museveni’s side, attracting a widespread following through catchy pop songs about social justice and corruption.

Many young Ugandans see him as their champion in a country mired in poverty and youth unemployment.

Museveni, a 76-year-old former rebel who seized power in 1986, is one of Africa’s longest-serving leaders.

Wine has been repeatedly arrested—most recently on November 3 after he filed his candidacy for the elections—his concerts are routinely banned and his public rallies broken up with teargas.

“We call for the immediate release of the detained opposition leaders, including Bobi Wine, and it’s important that security forces act in a way that respects human rights principles and the rule of law in dealing with protesters.”

The US embassy published a tweet saying it deplored the violence and extended its sympathy to the victims and their families.

“We urge all parties to renounce violence, undertake good-faith measures to reduce tensions, and respect fundamental freedoms,” it said.

The United States deplores the violence that has claimed multiple lives today, and we extend our sympathy to the victims’ families and loved ones.  We urge all parties to renounce violence, undertake good-faith measures to reduce tensions, and respect fundamental freedoms. pic.twitter.com/FewY3RgMNw

Patrick Oboi Amuriat, the candidate with the Forum for Democratic Change, was also detained on Wednesday but was subsequently released.

“I can say am out of police cells but not free as the police can arrest me any time as they have been doing,” he told AFP.

He said his party was reviewing whether to continue their campaign or not.

Two other presidential candidates, Henry Tumukunde and Gregory Mugisha Muntu, have called off their campaigns until Uganda’s electoral body takes action over what they called police brutality against opposition candidates.

Museveni made no immediate comment on the protests, and held a rally in the northeastern town of Karamoja.