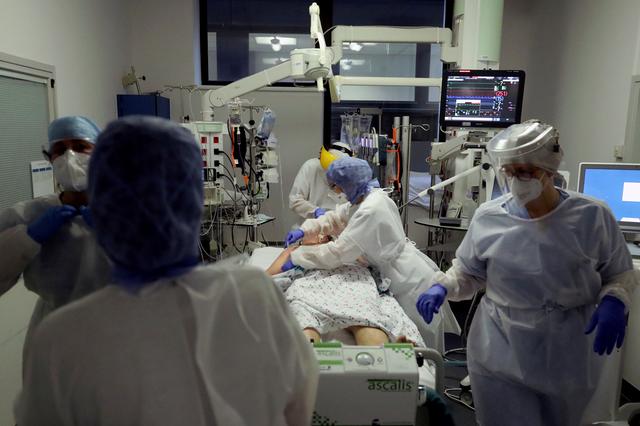 The second coronavirus wave seems to be less deadly than the first, Belgium’s crisis centre communicated at a press conference on Friday.

Nevertheless, “this second wave is once again claiming many lives,” Sciensano virologist Steven Van Gucht said while comparing the period from 10 March to 21 June with the period from 22 June to 17 November.

64% of Covid-related deaths occurred during the first wave, Van Gucht said, while, with 5434 cases so far, the second wave is accounting for 36% of the total so far.

The peak of deaths is already behind us, Van Gucht said, noting that it occurred on 6 November with 219 Covid-19 deaths in a day.

During the first wave, there was roughly one death for every two hospitalisations, according to Van Gucht, whereas that ratio has dropped to one in four during the second wave.

That doesn’t mean that the chance of dying in the hospital was one in two before or one in four now, he added, as “many deaths namely also occur in, for example, nursing homes.”

That said, “by comparing hospital admissions, we can have an idea of the overall intensity of the second wave compared to that of the first wave,” Van Gucht continued, “and then you can see that, proportionally speaking, the number of deaths is now much lower than compared to the period March-April.”

The crisis centre suspects that this is thanks to an improvement in the treatment of patients, doctors’ experience, and fewer deaths in nursing homes.

In the first wave, half the people who passed away were 86 or older, while that age has gone down to 84. At the same time, there has been a slight increase, from 5 to 6%, of deaths among people younger than 65 years old.

The proportion of deaths between genders has also shifted, with slightly more men passing away in the second wave, while the opposite was true in the first wave.

Van Gucht also discussed Belgium’s situation compared to its neighbouring countries. Belgium is second only to the Czech Republic in terms of the number of deaths when it comes to Europe.

It is clear, however, that the number of deaths is dropping in Belgium while other countries like Luxembourg and Italy are still dealing with an upward trend.

Belgium has counted 15,196 deaths in total since the start of the pandemic, for 550,264 confirmed cases, according to figures published by Sciensano on Friday.