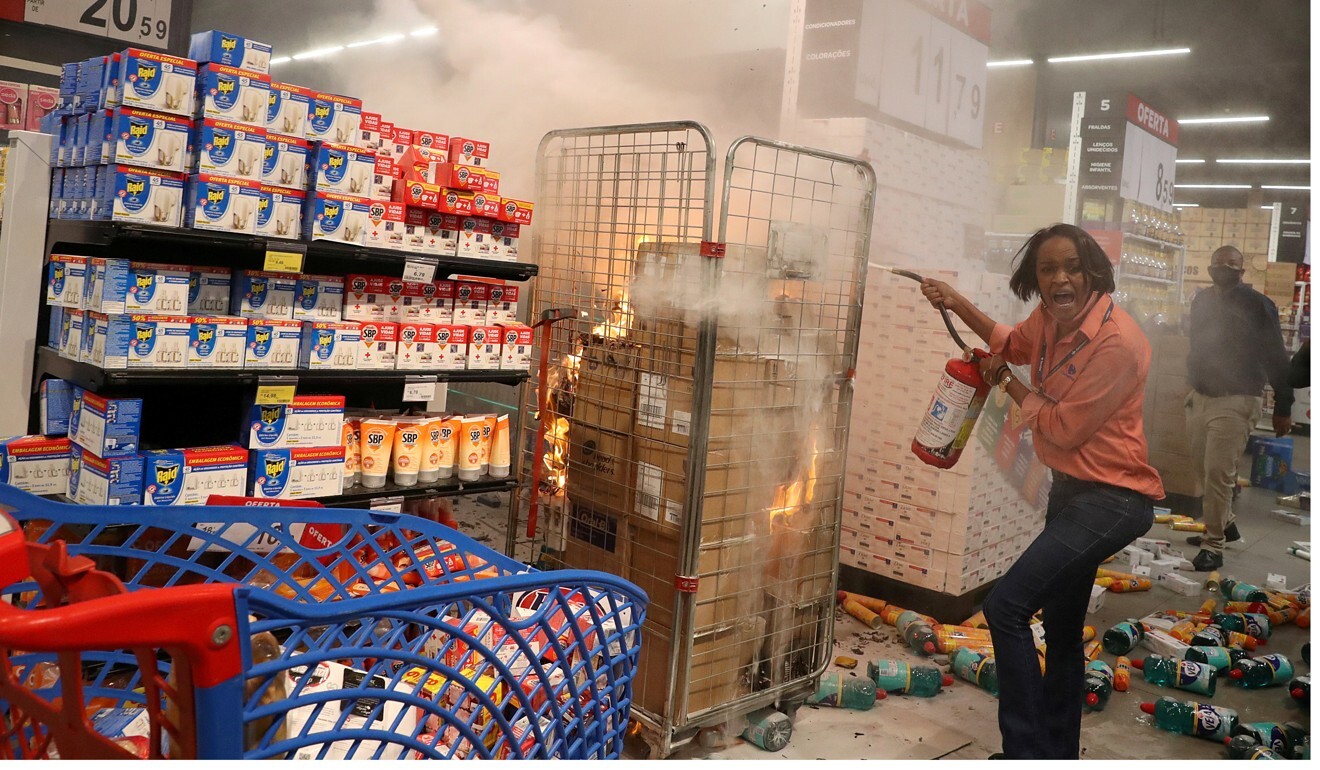 The death of a black man beaten by white security guards at a supermarket sparked protests across Brazil Friday as the country celebrated Black Consciousness Day.

A video of Thursday night’s incident in the southern city of Porto Alegre captured on a witness’s mobile phone was broadcast on social networks and Brazilian media.

As the clip went viral, around 1,000 protesters in Sao Paulo marched to a branch of the French-owned Carrefour supermarket chain and stoned the glass storefront before storming the premises, trashing and burning goods, according to an AFP photographer on the scene.

“Carrefour’s hands are dirty with black blood,” read one banner held up by demonstrators.

Police in Porto Alegre used tear gas and flash bang grenades to disperse a protest that had formed in front of the supermarket where the death occurred, according to local television.

Protests also broke out in the capital Brasilia, Belo Horizonte and Rio de Janeiro, where a crowd picketed a Carrefour supermarket to prevent customers from reaching the checkouts.

“Carrefour can close, it has killed our brother, it will not work!” chanted dozens of young people carrying banners and masks with the slogan “Black Lives Matter”.

The video on social media shows 40-year-old welder Joao Alberto Silveira Freitas repeatedly being punched in the face and head by a security guard while he is being restrained by another at the supermarket.

A woman stands beside them, filming with her mobile phone.

The military police in Rio Grande do Sul state said the man had threatened a female worker at the supermarket, who called security.

Silveira Freitas lost consciousness during the assault and died on the spot as medics tried to revive him.

A friend of the victim who witnessed the beating told G1 news that as the security guards were hitting him, Silveira Freitas “screamed that he could not breathe,” a scene reminiscent of the death of George Floyd, a black man who suffocated beneath the knee of a white US police in Minneapolis last May.

That killing sparked massive protests across the United States.

#USCitizens: Demonstrations against the Carrefour store chain have been reported throughout Brazil after a man was killed by security guards at a Carrefour in Porto Alegre. For your safety, avoid Carrefour locations while protests are ongoing. Monitor local media for updates. pic.twitter.com/qi1VhbgN8z

Both the supermarket security guards were arrested. One of them was identified as a member of the military police who worked part-time at the supermarket.

In a statement, Carrefour’s Brazilian subsidiary deplored the “brutal death” of Silveira Freitas and promised to take “appropriate measures to hold accountable those involved in this criminal case.”

Carrefour said it would cut ties with the security company that employed the guards.

In a series of tweets in Portuguese, the French head of Carrefour, Alexandre Bompard, expressed his condolences and said the images posted on social media were “unacceptable.”

“Internal measures have immediately been implemented by the Carrefour Group Brazil, principally on the question of security company contracts. These measures are insufficient. My values, and the values of Carrefour, do not allow for racism and violence,” he wrote, calling for a complete review of employee training, diversity and intolerance.

“From one November 20 to another, and every day, the racist structure of this country brings us brutality as a rule,” social activist Raull Santiago said on Twitter.

“It seems that we have no way out… not even on Black Consciousness Day,” Brazil international footballer Richarlison said.

“In fact, what conscience? They killed a black man, beaten in front of the cameras. They beat him and filmed. Decency and shame have been lost to violence and hatred,” the Everton player said on Twitter.

In Brazil, the last country in the Americas to abolish slavery — in 1888 — around 55 percent of the population of 212 million identifies as black or mixed-race.

Brazil’s far-right President Jair Bolsonaro had not commented directly on the death late Friday, but tweeted that the country’s problems “go beyond racial issues” and that the “great evil” of Brazil continues to be “moral, social and political corruption.”

“As president, I am colorblind: everyone is the same color. There is no one color [of skin] better than the others. There are good men and bad men,” added Bolsonaro.

Mourao said it was the work of “a security agent unprepared for the work” and denied that it was a racist act.

“For me, in Brazil, there is no racism. That is something that they want to import here to Brazil. That does not exist here,” said Mourao.

Philosopher Djamila Ribeiro, one of the most influential voices in the fight against racism in Brazil, told AFP that “the naturalization and justification of the death of black people as a result of violence is present in political, legal, business and media discourses.”