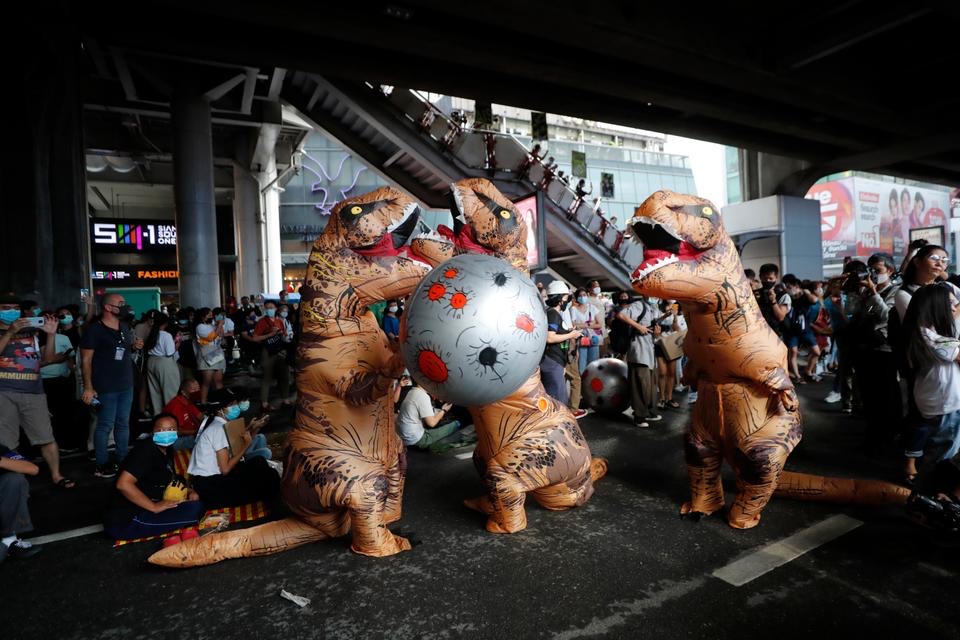 It was the first mass gathering in the kingdom since Prime Minister Prayut Chan-o-cha warned authorities would use all laws, including harsh royal defamation charges, to crack down on pro-democracy protesters.

Since August, emboldened by a broader political protest movement sweeping Thailand, a group called the “Bad Students” have campaigned for the resignation of Education Minister Nataphol Teepsuwan, demanded cultural change, equality, a curriculum overhaul and relaxation of strict rules.

But despite the threats the youngsters remained defiant as they danced alongside half a dozen T-Rex characters representing Thailand’s “political dinosaurs” and bounced around giant “asteroid” balls.

“We have to come out and make our voices heard to force change,” Leaf, 15 told AFP.

Many students wore coloured wrist bands to indicate they were underage, so older protesters could protect them.

“School is not a safe place (for girls),” one student’s placard said.

Hundreds of protesters at the rally wore rubber duck hair clips, a reference to pro-democracy protesters using inflatable pool toys to shield themselves from police water cannon and tear gas on Tuesday.

Many protesters were upset families have to fork out extra money on tutoring because of the poor quality of teaching.

“I spend so much for my daughter’s tutoring fees and need to enrol her in a faraway school so that she could get a good education. It should not be like this,” said Supaporn Pratumrat, 41, who attended the rally with her daughter.

Izzy 18, went to the US on an student exchange last year and said students there were able to have fun and pursue their hobbies after school but many Thai students don’t have that luxury.

“In Thailand some students go to extra classes from 4pm to 9pm,” he told AFP.

Since July, Thailand has been rocked by youth-led protests demanding a new constitution, unprecedented calls to reform the untouchable monarchy, and for Prime Minister Prayut, who came to power in a 2014 coup, to resign.

Police used tear gas and water cannon against protesters outside parliament on Tuesday and 55 people were injured including six people shot during scuffles between democracy activists and hardline royalists.

A day later protesters graffitied the outside the national police headquarters and threw paint at the complex.

The government’s decision to give police the green light to pursue royal defamation charges against pro-democracy protesters is likely to increase tensions ahead of the next major rally scheduled for Wednesday.

In Thailand lese majeste charges are routinely interpreted to include any criticism of the monarchy — including content posted or shared on social media.

Anyone convicted of defaming, insulting or threatening the king, queen, heir or regent faces between three and 15 years in prison on each count.

Meanwhile, Berlin is keeping an eye on events in Thailand.

“If the democratic movement was crushed by the army or the security forces, and victims were killed, then I do not believe that the king of Thailand can continue to stay in Germany,” German Social Democratic parliamentarian Nils Schmidt told German channel ARD.