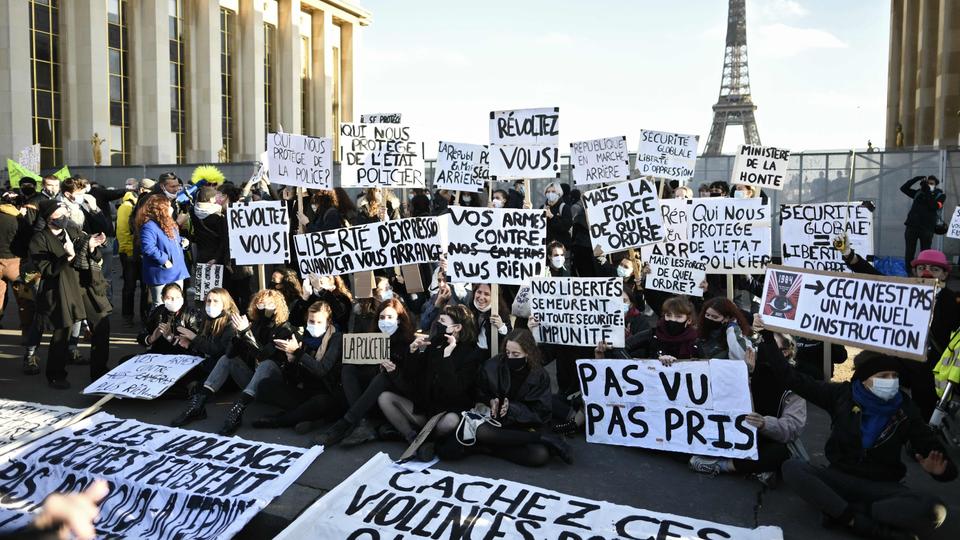 Thousands of demonstrators have taken to the streets of Paris on Saturday to protest a proposed new law that would criminalise the dissemination of images of police officers.

Protesters gathered on the Esplanade of Human Rights at the Trocadéro, chanting “Liberty!” and carrying placards saying: “No to the police state”.

The security bill, which was debated on Tuesday by French MPs, would make it a crime for anyone — journalists and civilians alike — to share images of police officers unless their faces had been blurred.

Furthermore, publishing images to social media with the intent to undermine an on-duty officer’s “physical or psychological integrity” could be punishable by a year’s prison sentence or a fine of up to €45,000.

It has also garnered criticism from human rights organisations and journalists who view the proposed bill as a means of gagging press freedoms and undermining a check on potential abuses of power by the police. They also argue that the bill’s wording is too vague.

“If such a law were to enter into force as it stands, it would constitute a serious violation of the right to information, to respect for private life, and to freedom of peaceful assembly, three conditions which are nevertheless essential to the right to freedom of expression,” Amnesty France said in a statement on their website in advance of the parliamentary debate.

READ  WHO To Address Mental Disorders In Nigeria

The measure, which is an amendment to existing legislation, has been compared to a similar law already in force in Spain since 2015.

The French parliament rejected a similar proposal earlier this year. French Interior Minister Gerald Darmanin, however, said Article 24 was necessary to “protect those who protect us” after reports that police officers are being increasingly targeted and threatened.

Last month, a police station in Champigny-sur-Marne, in Paris’ south-eastern suburbs, was stormed by a mob armed with fireworks and metal bars.

The scrutiny of French police, including its use of excessive force, has been intensifying after a series of incidents were captured on video and shared to social media platforms. One such incident was the death of Paris delivery driver, Cédric Chouviat, a 42-year-old father of five, in January.

In scenes reminiscent of the death of George Floyd in police custody in the United States, which was a catalyst for global Black Lives Matter protests, Chouviat was heard saying “I’m suffocating” as seven police officers held him down in footage that went viral.

Three officers were charged with manslaughter in July in connection with his death.