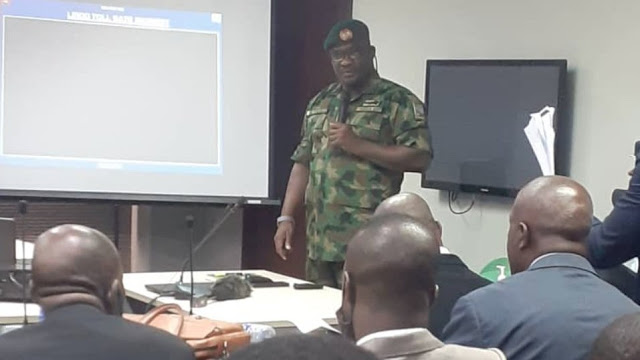 Brigadier General Ahmed Taiwo, the Commander of 81 Military Intelligence Brigade, Victoria Island, Lagos, has revealed that soldiers took both blank and live ammunition to the Lekki tollgate on the night of October 20.

Following the End SARS protest, soldiers had reportedly shot and killed peaceful protesters at the Lekki toll gate on October 20, 2020. The army insists its men only fired blank bullets into the air to disperse the crowd.

But a CNN investigation indicted the army of firing live bullets directly into the crowd of protesters, reportedly killing some and wounding many.

Speaking at the Lagos State Judicial Panel of Inquiry for Restitution, on Saturday in Lagos State, Taiwo said soldiers took live bullets to the scene for the purpose of self defence.

During cross-examination by two counsel for #EndSARS protesters, Messrs Adeyinka Olumide-Fusika (SAN) and Mr Adesina Ogunlana, the military general, however, insisted that soldiers at the tollgate fire only blank bullets into the air.

Asked by Olumide-Fusika if soldiers who went to the tollgate carried guns, Taiwo said, “When you are talking of guns, you are talking about high-calibre guns. They were carrying rifles; not guns.”

Taiwo added, “Definitely, a portion of the Force will carry live bullets, in case they are attacked. But the soldiers that formed the firing team, who fired, used blank bullets. And that is why you watched the video and saw exactly what happened.”

Also, under cross-examination by Ogunlana, Taiwo explained that in Phase Four military internal security operation “soldiers would be given both live and blank bullets.”

He said: “In this particular case, we saw that the peaceful protest had been infiltrated by hoodlums. They were peaceful protesters, no doubt, but there were also hoodlums who sought to take advantage, that was why they were armed with blank bullets in addition with live bullets.”