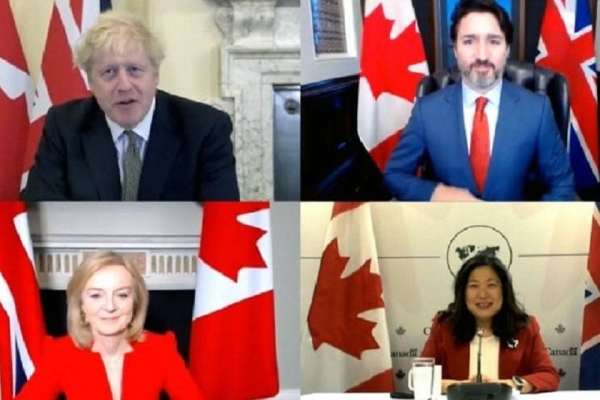 “The UK and Canada have locked in their existing trading relationship, worth £20 billion ( €22.5 billion), and agreed to begin negotiating a new more ambitious trade deal as early as next year,” the British government said in a statement.

The transition period between the UK and the European Union expires on December 31, 2020 which means that Britain will no longer be included in agreements signed between the bloc and other countries.

The deal signed with Canada means the two countries will continue to trade under the same rules as previously, while they negotiate a “bespoke” agreement.

The British government says the ability to strike free trade agreements with countries around the world is one of the main benefits of leaving the EU. It is banking on increased trade with countries such as the United States and India to offset any negative impact from severing ties with the EU, which accounted for 47% of Britain’s overall trade last year.

Canada accounted for about 1.5% of the U.K.’s total trade in goods and services last year.

Britain ships goods ranging from electric cars to sparkling wine to Canada, and imports products such as salmon and maple syrup from the Commonwealth country that also recognizes Queen Elizabeth II as head of state.

“The trade relationship and the historic relationship between Canada and the UK is just so deep that being able to make sure we’re seamlessly transitioning through with this, what are we calling it, that’s right, the Canada-UK trade continuity agreement, which is perfect to make sure that our businesses and yours continue to work well together.

“The UK is our fifth largest trading partner in the world,” he added.

The U.K. has now secured post-Brexit trade deals with 53 countries accounting for 164 billion pounds (€184 billion) of bilateral trade, the government said. That’s less than 12% of the 1.4 trillion pounds (about €1.6 trillion) of trade Britain recorded last year.

Last month, it signed a trade deal with Japan, which it hailed as “historic” and going “beyond the existing EU agreement”.

But with six weeks to go until the end of the transition period, the UK has yet to strike a deal with the EU — its main trading partner.

The British government had initially said it wanted a deal to be reached by mid-October at the latest in order to give time for national governments to ratify it. If no deal is found before the end of the transition period, then trade between the two sides will revert to World Trade organisation rules which are likely to lead to severe delays and renewed tariffs.