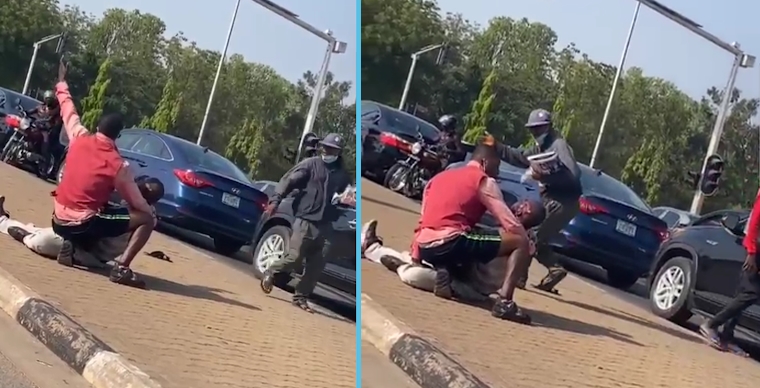 After the Thursday killing of Newspaper vendor, Ifeanyi Okereke, by an operative of the Department of State Services attached to Femi Gbajabiamila’s convoy, one of his colleagues, Ejike Egberimnwa, said Okereke was awaiting resumption in the Ministry of Labour Employment and Productivity before he was killed.

However, Gbajabiamila, at the newspapers distribution centre in Area 1, Garki, Abuja, announced an endowment fund for Okereke, while his two children, one of which was nine days old on Sunday, would be on scholarships till age 21.

The Speaker also said Okereke would be honoured in plenary on Tuesday.

Recall that the vendor was shot by the Speaker security aide at the Federal Secretariat around 3pm on Thursday and was pronounced dead at the National Hospital, Abuja.

The Speaker, during the meeting said, “Many of you who know me and those who have followed my work over the years will know that the focus of my legislatives activities over the years has been the protection of the common man. I have done this from Day 1 and I will continue to do it for as long as God gives me the life to serve as a legislator or in whatever capacity.

“This is why this has been a very difficult time for me. The irony is not lost, that the same person, who has championed the cause of the everyday Nigerians, as God would have it, is the same person who, for whatever reason which investigation will unravel, was caught up in this situation. I have been in deep mourning since Thursday.”

Gbajabiamila said he had visited the family of the late Okereke in Kwata village in the Madalla/Suleja area of Niger State, where he met with his wife and children.

Earlier, leaders of the distributors, as well as distributors, in their separate speeches, noted that Gbajabiamila had always identified with them on the streets of Abuja, stating that the protests by them was not against the Speaker but to seek justice for Okereke.

A vendor, Ejike Egberimnwa, who claimed to be an eyewitness when the incident occurred, hailed Gbajabiamila for taking proactive steps.

Egberimnwa added, “He was a boy of 38 years; he had not less than one hundred-and-something years to live more. You don’t know who he could become; he could be more than the Speaker. He just got employment as a civil servant in the Federal Ministry of Labour (Employment and Productivity); he was waiting for capturing before he was gunned down by a trigger-happy personnel..