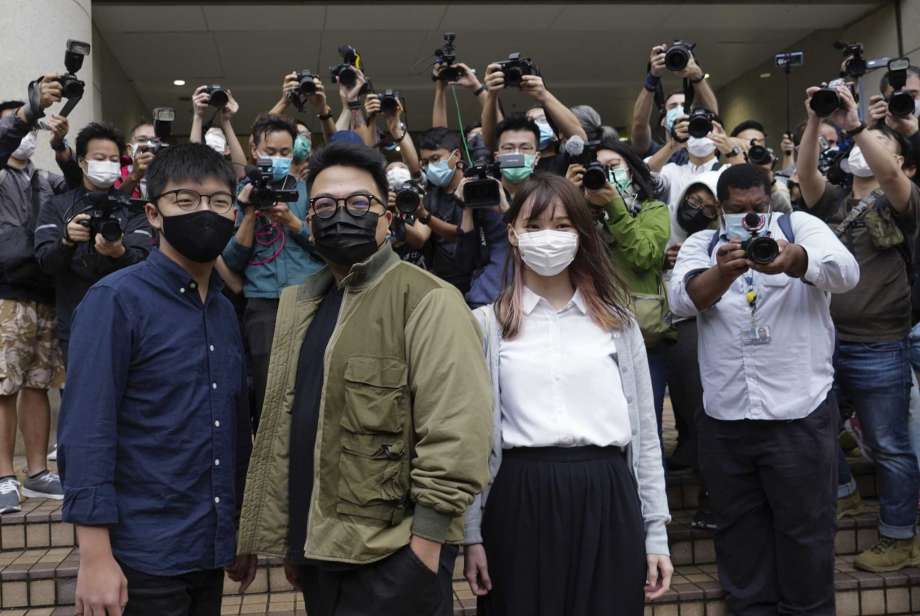 Prominent Hong Kong dissident Joshua Wong announced he and two other leading activists will plead guilty at the opening of a trial over their involvement in last year’s protests on Monday, adding he expects to be jailed.

Hong Kong was convulsed by seven straight months of huge and often violent democracy rallies last year in which millions took to the streets.

Beijing and local authorities have refused demands for free elections and have responded with a growing crackdown against democracy supporters.

Wong, 24, is being prosecuted alongside Ivan Lam and Agnes Chow — two other well-known dissidents — over a protest which took place last summer outside the city police’s headquarters.

“We three have decided to plead guilty to all charges,” Wong told reporters. “It will not be surprising if I am sent to immediate detention today.”

“We will continue to fight for freedom — and now is not the time for us to kowtow to Beijing and surrender,” he added.

Police became a target for demonstrators after tear gas and rubber bullets were routinely used to clear crowds when rallies kicked off last June.

The force’s headquarters was besieged on multiple occasions with crowds hurling eggs and daubing its walls with graffiti.

Prosecutors charged Wong, Lam and Chow with leading, inciting and joining one of the protests outside the station.

Chow had already said she planned to plead guilty, a tactic which can lead to a lighter sentence.

Wong and Lam had originally vowed to fight the charges.

But a day before Monday’s trial was set to begin Wong changed course, announcing his plan to plead guilty on Facebook.

They face up to five years in jail.

Despite his youth, Wong has already spent time in prison for leading democracy protests.

He became an activist when he was just 12-years-old, organising successful rallies against plans to make Hong Kong’s education system more ‘patriotic’ and similar to the mainland.

Then in 2014 he helped inspire and lead the “Umbrella Movement” — a 79-day peaceful occupation of three busy intersections by a largely student-led campaign calling for universal suffrage.

He was jailed for his involvement in those protests, alongside most of that movement’s main leaders.

When last year’s much larger democracy protests kicked off, Wong was still in jail.

He vowed to continue fighting for democracy on his release and made appearances at numerous rallies throughout the year.

However, the protests were deliberately leaderless, mostly organised by social media and encrypted chat forums.

They were also much more violent. Riot police unleashed thousands of rounds of tear gas and rubber bullets and were frequently filmed using batons to beat arrested demonstrators.

Small groups of hardline activists resorted to rocks, petrol bombs and even bows and arrows.

More than 10,000 people were arrested during the protests and Hong Kong’s courts are now filled with trials as most of the city’s leading activists and opposition figures face prosecution.

The demonstrations petered out at the start of the year thanks to fatigue, mass arrests and the emergence of the coronavirus.

An anti-pandemic ban on more than four people gathering in public has remained in place for most of this year.

Beijing has also imposed a broad security law which ramps up its direct control over the semi-autonomous city and outlaws certain political views. Opposition lawmakers have also been disqualified.

Authorities say they have returned much-needed stability to the global trade hub.

Critics counter that none of the underlying causes of the unrest have been addressed, and that opposition to Beijing’s rule remains widespread despite the lack of street protests.