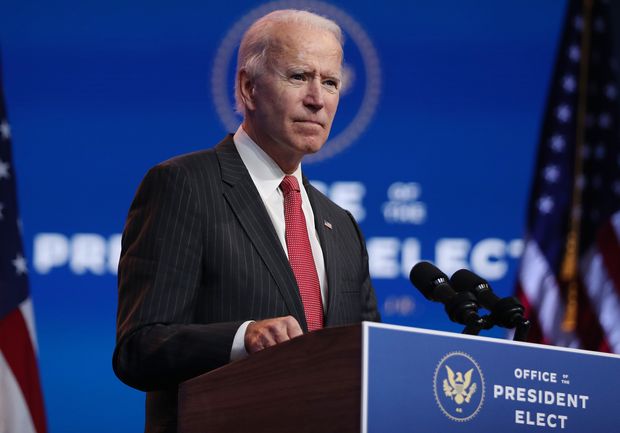 Joe Biden, the president-elect of United States will announce the first of his Cabinet appointments tomorrow.

According to Joe Biden’s aides, the president-elect is planning for a scaled-down inauguration due to the coronavirus pandemic.

He is laying the foundation for his new administration despite President Donald Trump’s refusal to concede.

Since Biden, a Democrat, was declared the winner of the Nov. 3 election two weeks ago, the Republican president has launched a barrage of lawsuits and mounted a pressure campaign to prevent state officials from certifying their vote totals, suffering another emphatic legal setback on Saturday in Pennsylvania.

“I hope that the administrator of the GSA will do her job,” Klain added, referring to GSA chief Emily Murphy.

“A record number of Americans rejected the Trump presidency, and since then Donald Trump’s been rejecting democracy,” Klain told ABC’s “This Week” programme.

Biden, working in his home state of Delaware, has announced a series of selections for White House posts.

Klain said that “you’re going to see the first Cabinet picks this Tuesday,” but declined to reveal the choices or the posts to be filled.

Biden allies also indicated he could announce his selection for secretary of state as soon as this week, with former national security adviser Susan Rice and veteran diplomat Antony Blinken seen as among the candidates.

Klain said there will be “scaled-down versions of the existing traditions” for Biden’s inauguration. Inauguration ceremonies and related events typically draw huge crowds to Washington. COVID-19 cases and deaths are surging in many parts of the country amid a pandemic that has killed about 256,000 Americans.

“We know people want to celebrate. There is something here to celebrate,” Klain said. “We just want to try to find a way to do it as safely as possible.”

Critics of Trump, including Democrats and some Republicans, have accused him of trying to undermine faith in the American electoral system and delegitimize Biden’s victory by promoting false claims of widespread voter fraud.

“Fight hard Republicans,” Trump wrote on Twitter on Sunday morning as he pressed his unsubstantiated narrative of voter fraud.

Russian President Vladimir Putin said yesterday he was ready to work with any U.S. leader, and would congratulate whoever emerges the winner of the American presidential election once all the legal formalities are settled, Russian news agencies reported.

Putin has withheld comment, while President Donald Trump has been taking legal action to try to overturn his Nov. 3 election defeat to Democratic President-elect Joe Biden.

“We will work with anyone who has the trust of the American people,” Putin was quoted as saying on state television.

But the winner must be named either by the opposing party, which should acknowledge the victory of their opponents, or after the final results of the election are confirmed in a legitimate, legal way, Putin said.

That follows previous Kremlin comment that it would wait for the official results of the U.S. presidential election before commenting on its outcome.