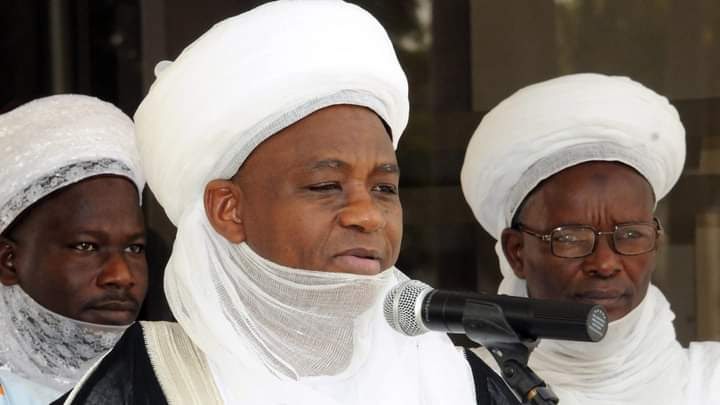 The Sultan of Sokoto, Muhammadu Saad Abubakar has lamented the increasing rate of insecurity in Nigeria, particularly in the Northern region of the country.

The traditional ruler who expressed deep concerns noted that issues of kidnap and banditry have now gone beyond the highways as the criminals now boldly move from house to house to abduct their victims.

The Sultan made the submission on Thursday at the fourth quarterly meeting of the Nigeria Inter-Religious Council (NIREC), in Abuja which held with the theme “Questing for peace in the challenges of insecurity and COVID-19.”

He said the situation is now so worrisome that the criminals openly move about with AK-47 guns almost unchallenged by security operatives, adding that the North is now the worst place to live in Nigeria due to the collapsed security system and the increasing cost of living.

He said: “The insecurity in the north is so high that people are even afraid of travelling from Funtua to Zaria, a journey of about 48 or 50 miles. Not to talk of Sokoto to Abuja or to Kano.

“We know what we are going through. We are so insecure in the north that people are losing hope. People keep things in the house so that when the bandits come, they would let them be free.

“Couple of weeks ago, 76 people were killed in Sokoto by bandits in a day, it is not a story because I went there with the governor in Eastern part of Sokoto but you don’t hear these stories because it happened in the North and we don’t have media that is strong enough to bring out these atrocities about the bandits so people think that the North is secure.

“No north is not secure at all. In fact, it is the worst place to be in this country because bandits go about in the villages with their AK47 and nobody talks to them. They stop at the markets and buy things and even collect change with their weapons.”

“I am not only a traditional ruler, I am also a religious leader. So, I am in a better place to tell the story. I can speak for the north in this regard because I am fully aware of the security challenges there. We have to sincerely and seriously find solutions to the problem, otherwise, we will find ourselves soon, in a situation where we would lose sleep because of insecurity.”

The traditional and religious leader further lamented the rising cost of living and the seeming inability of the government to provide any meaningful and sustainable solution.

“Food prices are on the increase and we need to do something about it. The cost of onion is too high and beyond the reach of many people. A hungry man is an angry man. The rising cost of foodstuff in the markets is an issue. The amount an onion costs in Nigeria today is an insight into the current economic hardship in the country.

“I think we really need to sit down and look at these issues because a hungry man is an angry man. We do not lack recommendations and solutions to our problems. What we lack is implementation and that sense of purpose to do the right thing, but we don’t like doing the right thing, we always want to cut corners,” he said.

On the issue of the #EndSARS protests which eventually led to the scrapping of the Special Anti-Robbery Squad (SARS), the Sultan stated that while the government took the right decision to scrap SARS, security operatives are still needed to guide the citizens.

He urged that the bad eggs among the security operatives be fished out while the good ones be empowered to do their jobs.

“We heard people calling for the scrapping of SARs, the President scrapped SARs and the same people came saying they should bring the Police back, there is insecurity everywhere.

We cannot do without the Police, we cannot do without our security agencies, no matter how bad the agency is, there are still so many excellent people within that agency, what we need to do is to fish out the bad elements from these agencies and then reform the agency and have a better force,” he said.

President, Christian Association of Nigeria (CAN), Dr. Samson Ayokunle Olasupo, who is also the co-chairman of the Nigeria Inter-Religious Council (NIREC) urged the government to be proactive in dealing with issues, lamenting that Nigerians are frustrated with the way things are currently in the country.

He said the root cause of the #EndSARS protest must be addressed while issues of petrol and electricity price hike must be reversed.

“That’s not what we sent them to do for us. The decision, evidently, has added to our pains and they should reverse it as quickly as possible,” he said.

He added that “I will still call on the government to address the problems that led to the situation than to be clamping down on the people that participated in the #EndSARS protest.”

The Secretary to the Government of the Federation, Boss Mustapha said the COVID-19 pandemic has greatly affected government revenue but all hands must be on deck to ensure the country survives as the government is not giving up on its responsibilities.

“Since the beginning of 2020, humanity has been under the siege of the COVID-19 pandemic which has warranted the deployment of drastic measures including lockdowns, closure of schools, international airspace, places of worship, businesses, government offices.”

“Today, despite all efforts including the deployment of enormous resources, our country still faces a measure of insecurity which is impacting negatively on our economy, social life, education of children and young persons, investment and remains a threat to lives and livelihood,” he said.