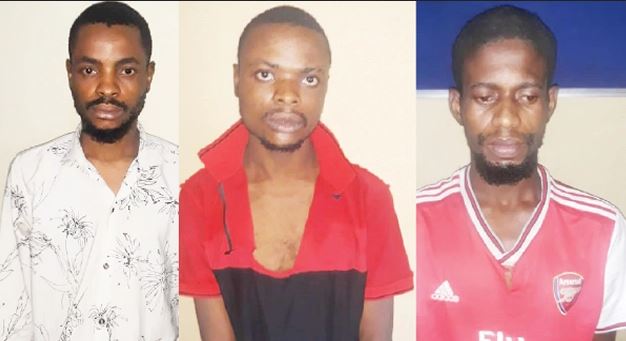 The suspects, Uzoma Amandi, Uburize Omesi and Onyekachi Amadi, were rounded up some weeks ago by operatives of the Inspector-General of Police Intelligence Response Team.

After unleashing terror for many months on residents of Port Harcourt city and Rumuodogbo, in the Emohua Local Government Area of Rivers state, three suspected members of a kidnap gang operating in Rivers State have been finally arrested.

The suspects, Uzoma Amandi, Uburize Omesi and Onyekachi Amadi, were rounded up some weeks ago by operatives of the Inspector-General of Police Intelligence Response Team.

City Round reports that the gang’s criminal escapades caught the attention of the police after they beheaded five members of ONELGA Security Peace and Advisory Council, a local vigilance group.

The suspects, said to be members of Icelander Confraternity, reportedly posted the victims’ dismembered body on social media.

Their mode of operation was to sneak into Rivers from Abia State, kidnap their targets and take them to their camp in Chuba area of the state. Then they would return to their base in Abia after collecting ransoms.

The Inspector General of Police, Mohammed Adamu, was said to have been informed about the activities of the gang in October 2020, after the gruesome killing of the vigilantes in Rumuodogbo community.

He thereafter directed the IRT led by DCP Abba Kyari to go after the gang.

A police source told our correspondent that the suspects hail from Rumuodogbo but reside in Aba town, Abia State, adding that their targets were mainly people driving flashy cars in highbrow neighbourhoods in Port Harcourt.

The source said, “They usually abandoned victims’ cars. They would transport their victims swiftly to their camp in a forest in Chuba. They accepted whatever they got as ransoms, released their victims and moved on to kidnap others.

“At the end of the week, they would return to Abia State where they all live with their families as ‘responsible’ men. The killing and beheading of the OSPAC vigilantes assisted the police to gather enough intelligence that led to the arrest of three members of the gang.”

Speaking to City Round during the week, 21-year-old Amadi, identified as one of the leaders of the gang, confessed to have participated in seven kidnappings and the killing of the vigilantes.

He said, “I am a tricycle rider from the community. I am married with a child. One of my friends known as Biggie forced me to join Icelander Confraternity. We ventured into kidnapping and I have taken part in seven operations. Biggie is our gang leader. We first kidnapped a woman in Port Harcourt in July 2020 and we kept her at Choba for three days.

“Biggie negotiated the ransom. I didn’t know how much was paid but he gave me N90,000. For the second operation, we kidnapped a man in Port Harcourt and took him to our camp in Chuba. He was released after his family paid a ransom from which I got N150,000 share.”

Regarding the third and fourth operations, Amadi explained that they kidnapped two men separately and he got a share of N200,000 from the money we made on both occasions.

He said they carried out two other operations at Chuba and Rumumaci areas which fetched him N130,000 share.

Amadi added, “My last operation was the kidnap of an Indian national. Augustine brought the job. We kidnapped the man at Rumuola and kept him at Chuba. The man spent four days with us and N2m was paid as ransom. I got N200,000 as my share.

“I relocated to Aba town because I didn’t want the police to arrest me in Rivers State. Unfortunately, the police traced me to Aba where I was eventually arrested.”

The suspect admitted that they murdered the local security guards to avenge the alleged killing of the residents of Rumuodogbo.

In his account, Omesi, 28, also a native of Rumuodogbo, claimed that hardship occasioned by the COVID-19 lockdown pushed him to join the gang to fend for his wife and their two children.

He said, “I am a tricycle rider. It was one Oneyebuchi that invited me to partake in kidnapping. I didn’t go out with the team to kidnap victims. I once watched over a victim at the camp together with some members. I spent one week with the victim while I was armed with an AK-47 rifle.

“I left the camp after one week because Onyebuchi, who is our boss, refused to supply food to us. I don’t know how the victim was released but Onyebuchi later gave me N30,000. The police arrested me in my house in Aba.”