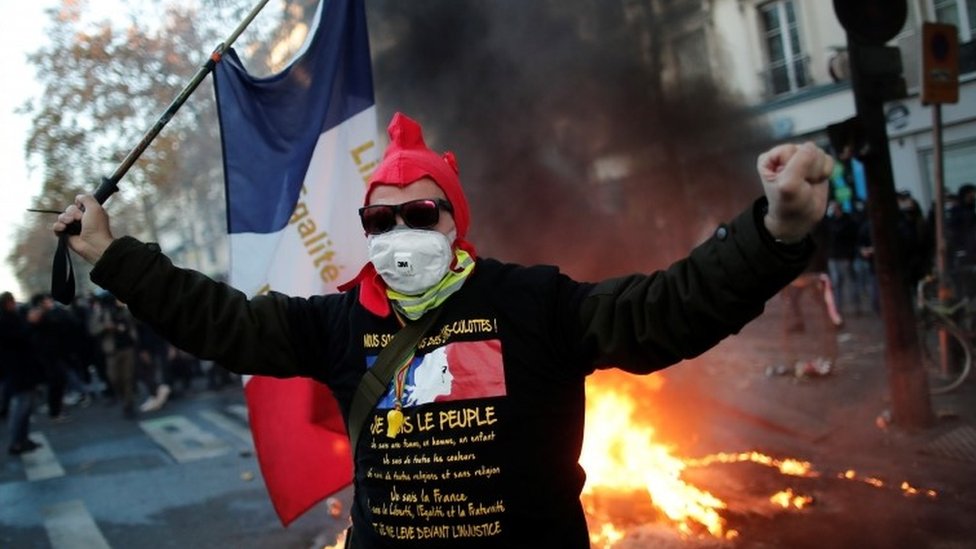 Thousands of critics of a proposed security law that would restrict sharing images of police officers in France gathered across the country in protest Saturday, with the country shaken by footage showing officers beating and racially abusing a Black man.

Police fired tear gas in the French capital after protesters launched fireworks at them, put up barricades and threw stones.

“There were all those protests in the summer against police violence, and this law shows the government didn’t hear us… It’s the impunity. That’s what makes us so angry,” protest participant Kenza Berkane, 26, told AP.

French President Emmanuel Macron on Friday said images of police beating a Black music producer in Paris put “shame” on the country, with top politicians and sportsmen expressing outrage over the incident.

The case, coming on the heels of a violent evacuation of migrants in central Paris, has shocked the nation and galvanised opponents of the government’s controversial new security law.

It was passed by the National Assembly last week – although it is awaiting Senate approval – provoking protests and drawing condemnation from media organisations across France.

“The bill will not jeopardise in any way the rights of journalists or ordinary citizens to inform the public,” Alice Thourot, an MP for Macron’s La République En Marche (LREM) party and the co-author of the clause, told French daily Le Figaro last week. Article 24 would “outlaw any calls for violence or reprisals against police officers on social media – and that only”, Thourot said.

However, NGOs and journalists’ groups are calling for the article to be withdrawn, claiming that it contradicts “the fundamental public freedoms of our Republic”.

Media unions say it could give police a green light to prevent journalists – and social media users – from documenting abuses.

They point to the case of music producer Michel Zecler, whose racial abuse and beating at the hands of police was recorded by CCTV and later published online, provoking widespread criticism of the officers’ actions.

In another instance, journalists on the ground at a French migrant camp witnessed and recorded police brutality on Monday as the Paris area was cleared.

‘Soiled the uniform of the Republic’

The incidents have increased pressure on Darmanin and raised questions over the future of Paris police chief Didier Lallement.

In an interview with France 2 television on Thursday, Darmanin said the officers involved in Zecler’s beating “had soiled the uniform of the Republic”.

Macron has held talks with Darmanin to call for tough punishments for those involved in the beating, a government source said.

Protests over police brutality have already taken place elsewhere in the country ahead of Saturday.

Demonstrators took to the streets of Toulouse on Friday evening brandishing placards with slogans like “police everywhere, justice nowhere”. In Nantes, police said around 3,500 rallied, while organisers put the crowd at 6,000-7,000.

The condemnation has spread on social media sites following Zecler’s beating, with top footballers such as Kylian Mbappé joining his French national teammates and other athletes in calling for an end to racism.

“Unbearable video, unacceptable violence,” Mbappé wrote on Twitter next to a picture of the injured producer, “Say no to racism.”