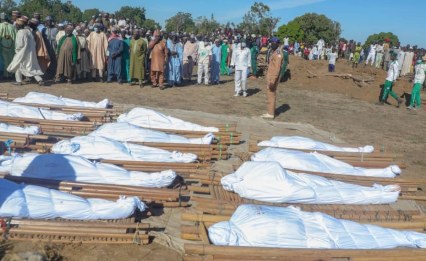 The United Nation has reacted to the attack on Rice Farmers in Borno state, contrary to local reports that about 43 farmers were Killed, it said 110 civilians were killed by Boko Haram.

The UN Humanitarian Coordinator in Nigeria, Mr Edward Kallon, who disclosed this, also said, many other persons were injured in the deadly attack by the terrorist group.

Also, the Amnesty International in a tweet on Sunday disclosed that 16 of the victims were internally displaced persons.

He disclosed that the afternoon attack was carried out by armed men on motorcycles, who murdered men and women, who were harvesting their fields in Kwashebe and other rural communities in the Jere Local Government Area.

Kallon, while condoling with the government and people of Nigeria, also said many women might have been kidnapped during the attack.

He noted, “We have also received reports that several women may have been kidnapped. I call for their immediate release and return to safety. My thoughts are also with the rural communities in the area, who are shocked by the brutality of yesterday’s (Saturday’s) attack and fear for their safety.”

“The entire UN system and the humanitarian community working to provide life-saving and development assistance to the most vulnerable in Borno State are outraged by the incident. Such direct attacks against innocent civilians jeopardize the ability for the most vulnerable people to survive the adversity they are facing, and which we are striving to alleviate.”

READ  How my aunt sold my one-month-old son to child trafficking syndicate for N950,000 — 20-yr-old orphan

The UN described the incident as “the most violent direct attack against innocent civilians this year,” and called for the perpetrators to be brought to justice.

“It is, unfortunately, one of too many such attacks targeting farmers, fishermen and families who are trying to recover some livelihood opportunities after over a decade of conflict. I strongly condemn this attack and any act of violence against innocent civilians and I firmly urge all actors on the ground to respect international laws and humanity,” the UN official stressed.

Meanwhile, in a swift reaction, the Defence Headquarters, on Monday, faulted a report by the United Nations that 110 civilians were killed by Boko Haram in Saturday onslaught on farmers in the Jere Local Government Area of Borno State.

The Coordinator, Defence Media Operations, Maj. Gen. John Enenche, said as of Monday morning, 43 corpses were recovered from the incident scene in the Zabarmari area of the northeast state.

Enenche said the troops counted the corpses together with the locals and 43 deaths were recorded.

He spoke while featuring on Channels Television’s Sunrise Daily programme monitored by WITHIN NIGERIA.

He said, “I knew it (the issue) is going to come up particularly because it is coming from the United Nations and not a source that does not want to be identified. This is a source that has identified itself that a 110 specifically (were murdered).”

Enenche, however, explained that he contacted the field commandants and “they gave me a synopsis of what happened. When the governor was to go (to the scene) and after they had recovered the dead, the troops had to move in there and they counted 43.

“Of course, some people ran into the bush and they started coming back and trickling in.

As at 2pm yesterday (Sunday), I called them and they got back to me at about 7pm yesterday, still counting, looking if they will recover (more corpses). We call it Exploitation after Action Review.”

The DHQ Coordinator said the search for more remains of victims is still on but insisted that 43 corpses were retrieved from the scene as of today.

“Probably we may count up to the figure he (Kallon) gave in the future but as it is now, what we have counted with the locals is still 43 and we are hoping that we don’t get beyond that.

“This is the real situation. I did not sleep, we had to follow it because this is very relevant coming from the United Nations.”