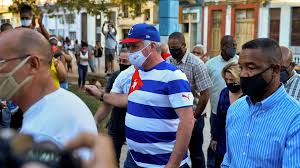 Cuban President Miguel Diaz-Canel said Sunday that a recent protest in Havana by an artists’ collective over freedom of expression was “the last attempt” by US President Donald Trump’s administration “to overthrow the revolution.”

“You know they tried to trick us. They set up a media circus,” Diaz-Canel told hundreds of young people who took part in a “defense of the revolution” event in a park in the capital.

The protest was “the last attempt that the Trumpists and the anti-Cuban mafia (in Miami) could lead.”

He called it part of an “unconventional war strategy to try to overthrow the revolution.”

A group of 14 people, members or associates of the San Isidro Movement of artists, recently barricaded themselves for 10 days in a house in Havana.

They were demanding the release of another member, rapper Denis Solis, sentenced to eight months in prison for contempt.

They were expelled Thursday evening by the police, who said the raid was necessary due to Covid-19 protocols since one person there had just arrived from Mexico via the United States without properly quarantining.

The Cuban Foreign Ministry on Saturday summoned the US charge d’affaires in Cuba, Timothy Zuniga-Brown, denouncing “flagrant and provocative interference” with the San Isidro Movement.

On Friday, about 200 artists gathered for hours in front of the Ministry of Culture to press for more freedom of expression, a rare demonstration of its kind in Cuba.