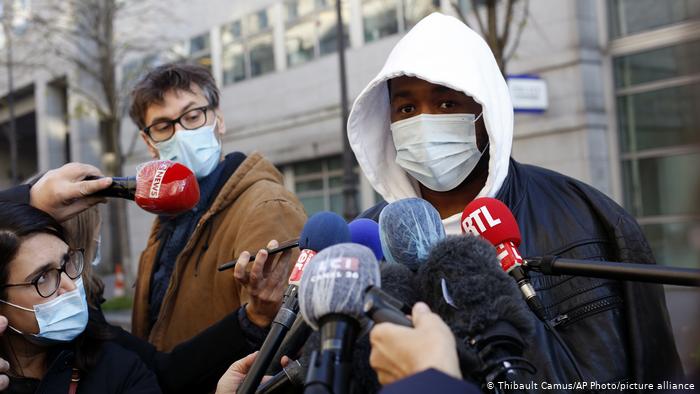 Four police officers have been placed under formal investigation over the beating of music producer Michel Zecler, the Paris prosecutor told a press briefing on Sunday, adding that three of the four officers will remain in custody.

The minutes-long beating of Zecler last week was recorded on CCTV and has been widely circulated on social media, sparking an outcry in the national and foreign press and demonstrations against police violence across the country.

Rémy Heitz, the Paris prosecutor, said judicial authorities want to ensure that the three officers in detention to not have contact with one another and do not exert pressure on witnesses.

Prosecutor ‘outlined series of events’ since Michel Zecler was arrested

A fourth police officer, who is not accused of taking part in the beating but of throwing a tear gas grenade into Zecler’s music studio, will be suspended from active service and placed under judicial control, Heitz said.

His announcements come a day after mass protests throughout France opposing police violence and the government’s new legislation restricting sharing images of officers.

Some 133,000 people took to the streets across France on Saturday, according to the government’s figures. Demonstrators in Paris carried red union flags, the national tricolour flag and homemade signs denouncing police violence and demanding media freedom. Protests also took place in Bordeaux, Lille, Strasbourg, Montpellier, Nantes and other French cities.

Crowds included citizens of varied political stripes expressing anger over what they perceive as a hardening of police tactics in recent years, especially since France’s Yellow Vest protests against economic hardship in 2018.

It was passed by the National Assembly last week, but is awaiting approval in the Senate.

“The bill will not jeopardise in any way the rights of journalists or ordinary citizens to inform the public,” Alice Thourot, an MP for Macron’s La République En Marche (LREM) party and the co-author of the clause, told French daily Le Figaro last week. Article 24 would “outlaw any calls for violence or reprisals against police officers on social media – and that only”, Thourot said.

However, NGOs and journalists’ groups are calling for the article to be withdrawn, claiming that it contradicts “the fundamental public freedoms of our Republic”. Prime Minister Jean Castex announced on Friday that he will appoint a commission to redraft Article 24.

Media unions say it could give police a green light to prevent journalists – and social media users – from documenting abuses. They have pointed to the case of Zecler and the police’s heavy-handed clearing of a migrant camp in Paris on Monday, footage of which was also posted online.