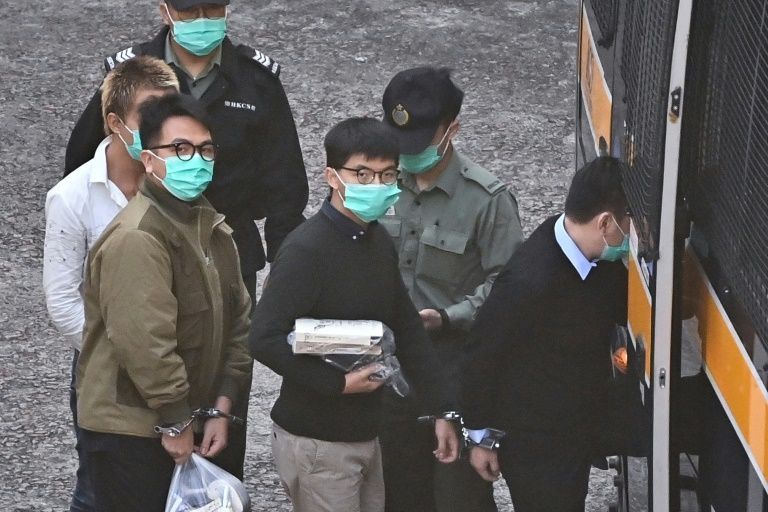 Wong, 24, was prosecuted alongside his close friends and fellow campaigners Ivan Lam and Agnes Chow over a rally outside the police headquarters.

“The days ahead will be tough but we will hang in there,” Wong shouted as he was led away.

The three — some of the city’s most visible critics of Beijing’s rule — pleaded guilty to various charges including inciting an unlawful assembly.

“The defendants called on protesters to besiege the headquarters and chanted slogans that undermined the police force,” Magistrate Wong Sze-lai said as she handed Wong 13.5 months in jail.

“Immediate imprisonment is the only appropriate option.”

Chow, who burst in tears as the sentence was read out, received 10 months and Lam got seven months.

Hong Kong was convulsed by seven straight months of huge and often violent rallies in which millions took to the streets.

Beijing has refused demands for universal suffrage and authorities have pursued democracy supporters with criminal cases and a tough new security law.

The tactics have stifled the movement and restored a semblance of calm.

But the finance hub remains deeply polarised with many still seething against Beijing’s growing hold on the semi-autonomous city.

Despite their youth, Wong and Lam have already spent time in prison for leading democracy protests.

“All these pains and sufferings would only strengthen our courage and conviction for democracy and justice,” Wong wrote on Twitter ahead of his sentencing. “Cages cannot lock up souls.”

Nathan Law, a student protest leader who also spent time behind bars and fled Hong Kong for Britain earlier this year, said jailing those pushing for democracy would not end their influence.

“I don’t believe prison will bring them down,” he told AFP. “I believe they will continue to be very important people to Hong Kong in the future.”

“Movements have cycles so we must learn to devote ourselves during high tide and stick to our aspirations at low tide,” he added.

Wong, Chow, 23 and Lam, 26, joined Hong Kong’s pro-democracy movement when they were in their teens.

And they played prominent roles two years later in the “Umbrella Movement” — a 79-day peaceful occupation by a largely student-led campaign calling for universal suffrage.

Leading figures from those protests, including Wong, were jailed and the democracy movement struggled in the years after.

But it exploded onto the streets once more in June 2019, sparked by plans to allow extraditions to mainland China and its opaque legal system.

Millions took to the streets over the next seven months in a deliberately leaderless campaign mostly organised via social media calling for greater democracy and police accountability.

Figures like Wong and Chow joined some of the protests and also used their celebrity status over the years to lobby for international sanctions, a move that infuriated Beijing with state media casting them as traitors.

Earlier this summer, Beijing imposed a broad security law which ramps up its direct control over the city and outlaws certain political views.

More than 10,000 people have been arrested over the last 18 months and most of Hong Kong’s leading activists and opposition figures face prosecution.

“The suppression is not only targeting prominent figures. It comes from all directions and is going after all kinds of people,” Isaac Cheng, a friend of Wong’s and former vice chairman of their now-defunct political party Demosisto, told AFP.

Chow is being investigated under the security law for allegedly “conspiring with foreign forces” by pushing for sanctions.

Wong is among another group of activists being prosecuted for a vigil marking the anniversary of Beijing’s 1989 Tiananmen crackdown earlier this year.

But Cheng described a sense of despondency among many younger Hong Kongers.

“We thought this place belongs to us but it now turns out to be a crime if a student thinks differently from the government,” he said.