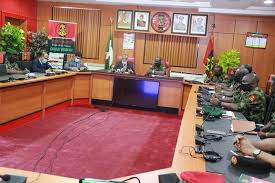 He said the Nigerian Army would not tolerate any plot to scuttle the current democratic dispensation.

Buratai, who spoke during the decoration of 39 newly promoted major generals on Friday, said he was aware that “some generals were being approached and all our eyes are on them.”

He said, “Democracy has come to stay. We will not tolerate any agent of destabilisation. The years of military misadventure in politics have never carried us anywhere. It is over.”

Disclosing that the Army hierarchy was aware of some interests making efforts to interact with certain personnel, the COAS expressed confidence in the discipline and loyalty of the newly decorated officers.

“The crop of officers decorated will never be dragged into any interest that is contrary to the sustenance of democracy in our nation.

“All our eyes are on you. We know there are several moves to get your attention. You must make sure that whatever you are doing, and when some persons approach you, you must act within the confines of the constitution.”

“I must say that the Spiritual Warfare Seminar we had last time helped us during the last #EndSARS protests to the extent that there was no single corpse, but some persons were seeing double at Lekki toll gate in Lagos State.”

He continued, “We will continue to protect every law-abiding Nigerian anywhere in the country and we will do that in accordance with the rules of engagement and confines of the constitution.”

To officers and soldiers, the COAS said, “The next most important appointment after the Chief of Army Staff is that of the General Officers Commanding the divisions; the GOC must see himself as that repository of discipline, loyalty and regimentation. We shall work hard to ensure we improve the welfare of our troops.

“Towards this end, I am considering more empowerment to the GOCs to make sure that you administer and motivate your formations more effectively.

“There is more work to be done in the theatres of operation but by and large, I want to say there is tremendous improvement in countering insecurity. We must maintain our new tempo that is working. I believe that in the not too distant future the new strategies will be successful.”

In his address, guest of honour and Minister of Defence, Maj. Gen. Bashir Magashi (retd.), corroborated the comments of the Chief of Policy and Plans, Army, Lt. Gen. Lamidi Adeosun, who said godfatherism and lobbying for appointments and promotions was affecting the operations of the Nigerian Army.