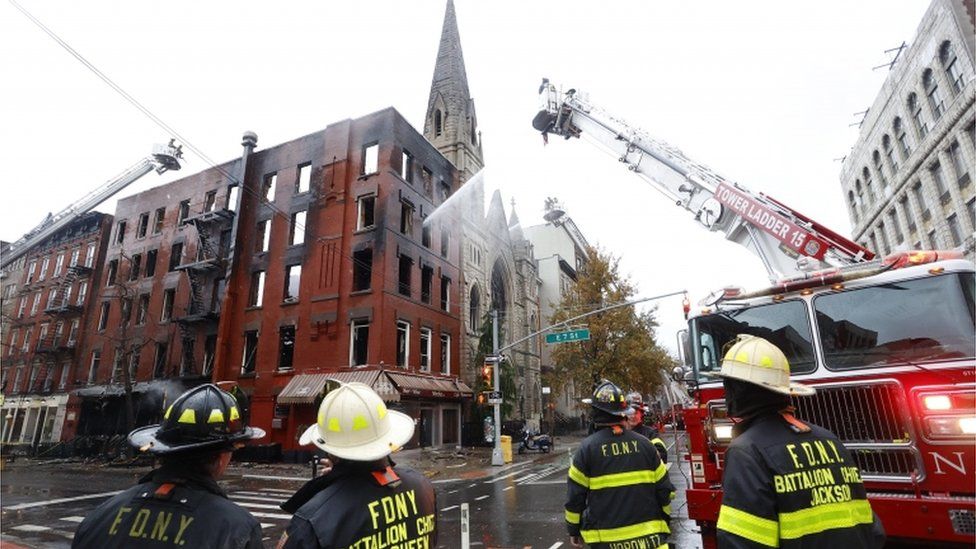 A fire has torn through a 128-year-old church in New York, destroying stained glass windows and the structure inside.

The blaze began early in the morning on Saturday at an empty building next to Middle Collegiate Church.

Nobody was killed but four firefighters suffered minor injuries. The authorities have launched an investigation.

“It’s going to be a difficult time for them to rebuild,” assistant fire chief John Hodgens reportedly said.

The mainstream Protestant church was completed in 1892. It houses the New York Liberty Bell, so called because it rang to celebrate the signing of the US Declaration of Independence in 1776.

Cast in 1729 in the Dutch city of Amsterdam, the bell is reportedly 25 years older than the iconic cracked Liberty Bell in Philadelphia, a famed symbol of the US revolution. It is unclear whether the New York Liberty Bell was damaged in the fire.

On Twitter staff at Middle Collegiate Church thanked people for their support amid their “overwhelming grief”.

“The Church is not a building, but buildings matter. This is home,” they wrote, and attached a link for people who want to donate.

The church is known for supporting the Black Lives Matter movement, LGBTQ rights, and efforts to tackle climate change.

“This is our Notre-Dame,” congregant Joolz Gemini told the New York Times, referring to the fire that gutted Paris’ most famous cathedral in 2019. “Just like them, we will rebuild too.”