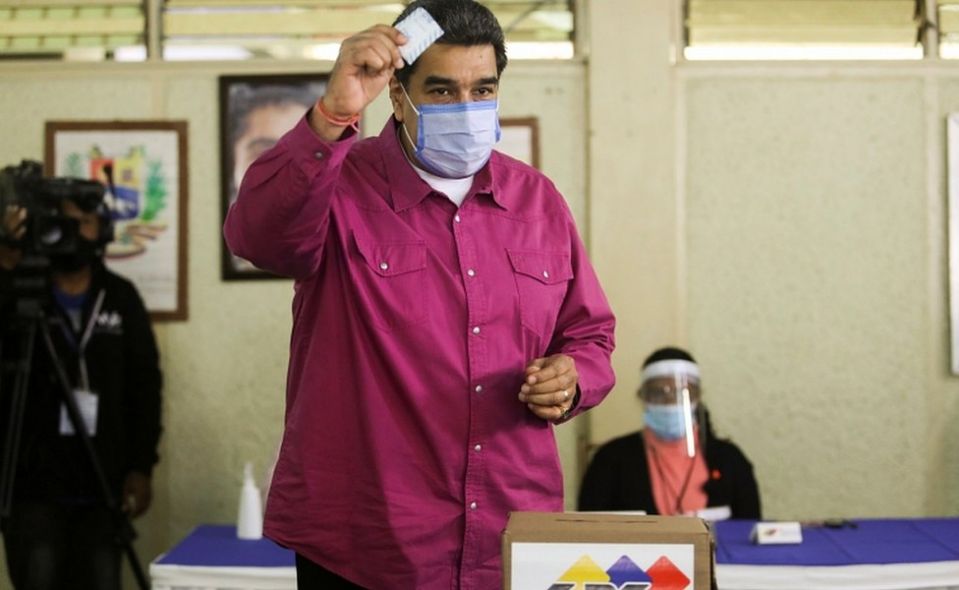 Just 31 percent of the country’s 20 million registered voters participated in the election, she said.

The results were a foregone conclusion with the vote largely shunned by opposition candidates and declared a sham by the EU, US and several other nations.

The boycott effectively handed Maduro’s party control of an expanded 227-seat National Assembly – the only institution that was not in the ruling party’s hands. Maduro already has the loyalty of the courts, the military and other institutions.

In a videotaped message issued Sunday, opposition leader Guaido noted the election’s low voter turnout. “The truth cannot be hidden. The majority of Venezuela turned its back on the fraud that began months ago,” he said.

Despite Venezuela’s political turmoil, voting took place Sunday with no apparent problems in the capital Caracas. A light flow of voters walked up to ballot boxes at Andres Bello School downtown. Voters checked their names on a wall outside, and showed identification cards inside before registering their votes on touchscreen machines, which printed paper ballots they then dropped into a box.

The Supreme Court this year appointed a new elections commission, including three members who have been sanctioned by the US and Canada, without participation of the opposition-led Assembly as the law requires.

The court also removed the leadership of three opposition parties and appointed new leaders the opposition accuses of conspiring to support Maduro.

Maduro has campaigned for his party’s candidates – including his son and wife – and promised to finally silence what he identifies as the right-wing opposition, which he accuses of inciting violent protests and inviting US sanctions.

“There are those who plot coups, those who ask for military intervention,” Maduro said on Saturday night in a broadcast on state television, dismissing criticism of the election. “We say: Votes yes – war no, bullets no.”

The election comes amid uncertainty over the impending change of US administration. Like outgoing President Donald Trump, President-elect Joe Biden has called Maduro a “dictator”, though it’s unclear what approach he’ll take toward Venezuela’s political crisis.

Guaido’s opposition movement is holding its own referendum over several days immediately after Sunday’s election. It will ask Venezuelans whether they want to end Maduro’s rule and hold new presidential elections.