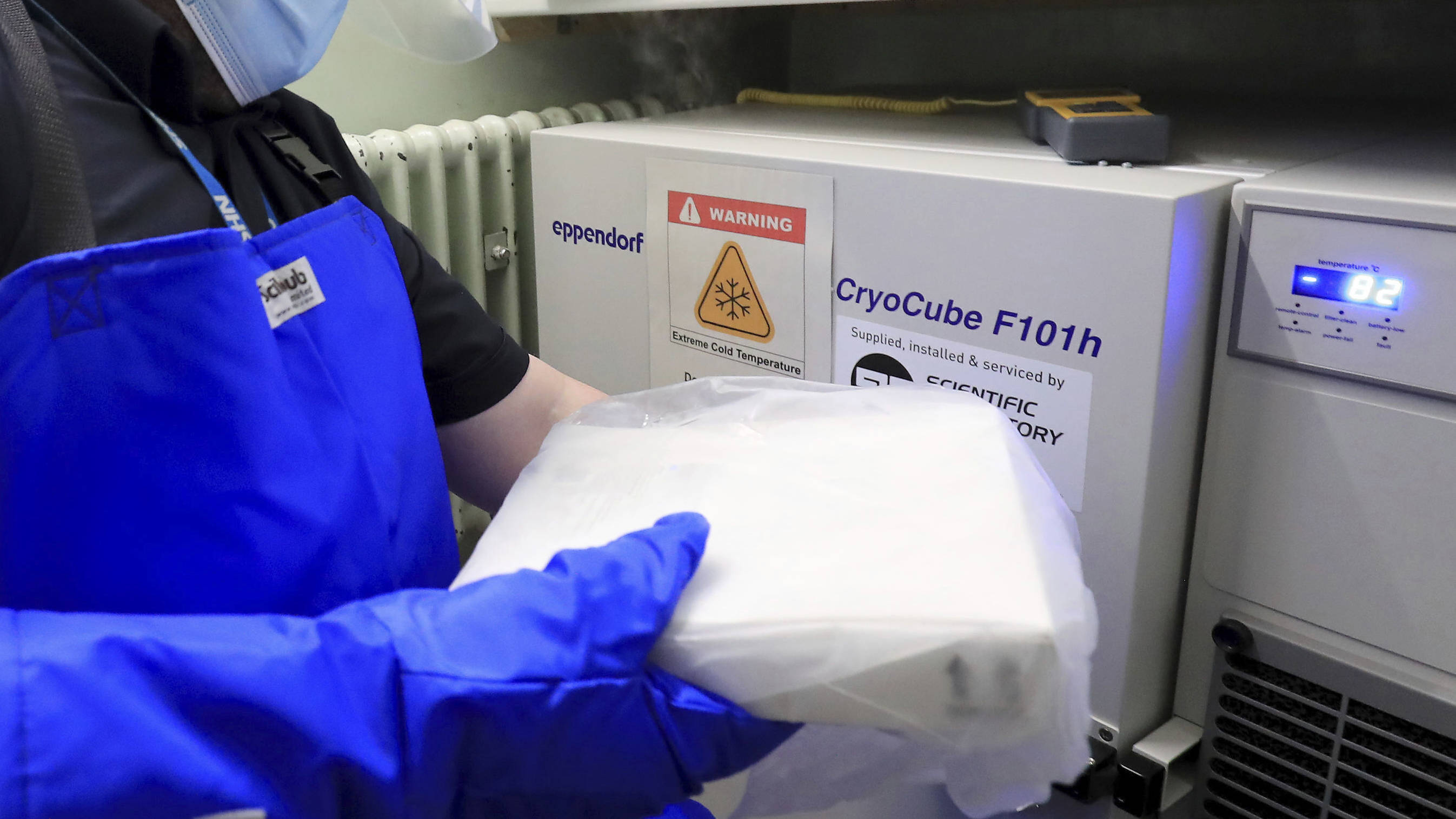 Shipments of the coronavirus vaccine developed by American drugmaker Pfizer and Germany’s BioNTech were delivered Sunday in the U.K. in super-cold containers, two days before it goes public in an immunisation program that is being closely watched around the world.

Around 800,000 doses of the vaccine were expected to be in place for the start of the immunisation program on Tuesday, a day that Health Secretary Matt Hancock has reportedly dubbed as “V-Day,” a nod to triumphs in World War II.

“To know that they are here, and we are amongst the first in the country to actually receive the vaccine and therefore the first in the world, is just amazing,” said Louise Coughlan, joint chief pharmacist at Croydon Health Services NHS Trust, just south of London.

“I’m so proud,” she said after the trust, which runs Croydon University Hospital, took delivery of the vaccine.

Last week, the U.K. became the first country to authorise the Pfizer-BioNtech vaccine for emergency use. In trials, the vaccine was shown to have around 95% efficacy.

Vaccinations will be administered starting Tuesday at around 50 hospital hubs in England. Scotland, Wales and Northern Ireland will also begin their vaccination rollouts the same day.

Governments and health agencies around the world will be monitoring the British vaccination program, which will take months, to note its successes and failures and adjust their own plans accordingly.

Russia on Saturday began vaccinating thousands of doctors, teachers and others at dozens of centres in Moscow with its Russian-made Sputnik V vaccine, which was approved over the summer after being tested in only a few dozen people.

Patients 80 and above among first to receive jabs

The excitement in Britain, which has Europe’s highest virus-related death toll at more than 61,000, was palpable.

Patients aged 80 and above who are already attending hospitals as outpatients and those being discharged after a stay in the hospital will be among the first to receive the jab. Hospitals will also start inviting over 80s in for a vaccine shot and will work with nursing homes to book staff into vaccination clinics.

Any appointments not taken up will be offered to those health workers deemed to be at the highest risk of Covid-19. Everyone who is vaccinated will need a booster jab 21 days later.

Buckingham Palace refused to comment on speculation that Queen Elizabeth II, 94, and her 99-year-old husband, Prince Philip, will soon be vaccinated and then make it public, a move that could reassure anyone nervous about getting a vaccination.

“Our goal is totally to protect every member of the population, Her Majesty, of course, as well,” Dr. June Raine, chief executive of Britain’s Medicines and Healthcare products Regulatory Agency, which authorized the vaccine, told the BBC.

The U.K. has secured 40 million doses of the Pfizer vaccine, which can cover 20 million people. Since the British government will only immunise people over 16, around 55 million people in the U.K. will be eligible. In total, Britain has procured 357 million doses of seven vaccine candidates, including 100 million of the much cheaper Oxford vaccine, which has a lower efficacy rate than the Pfizer or Moderna vaccines.

READ  PHOTOS & VIDEO: Nigerian Soldiers Spotted Hailing Soldiers From Chad As Their President Lead Them To War Against Boko Haram

Now that the first tranche of the vaccine has arrived from Pfizer’s manufacturing plant in Belgium, checks are being conducted by a specialist medical logistics company to ensure there was no damage in transit. This could take up to a day.

Each box containing the vaccines, which includes five packs of 975 doses, will need to be opened and unpacked manually at specially licensed sites. After that, the vaccines will then be made available to hospitals.

Delivering the Pfizer-BioNTech vaccine is complicated because it needs to be stored at super-chilled temperatures: about minus 70 degrees Celsius (minus 94 degrees Fahrenheit). Fortunately, the vaccine is stable at normal refrigerator temperatures, between 2 and 8 degrees Celsius (35.6 to 46.4 F), for a few days, meaning it can be stored locally. After defrosting the vaccine, which takes a few hours, additional time is required to prepare it to be given in a shot.

Public Health England has secured 58 special Twin Guard ultra-low temperature freezers that provide sufficient storage for approximately five million doses. The fridges, which are not portable, each hold around 86,000 doses.

The vaccine won’t just be provided by hospitals. Local doctors’ offices and other local health care centres are being put on standby to start delivering the vaccine, with a small number expected to do so the week of Dec. 14. More medical practices in more parts of the country will be phased in during December and in the coming months.

There are plans for vaccination centres treating large numbers of patients in sports areas and conference centres and for local pharmacies to be able to offer the jabs as they do with annual influenza shots.

Although nursing home residents top the prioritisation list given to the British government by the independent Joint Committee on Vaccination and Immunisation, they won’t be getting the vaccinations straight away, as the vaccine packs of 975 doses cannot yet be divided, making it very difficult to deliver vaccines to individual care homes.

The NHS hopes authorities will soon approve a safe way of splitting up the dose packs so the shots can get to nursing homes during December.

During the first phase of the immunisation program, Britain has created nine separate groups in its prioritisation list down to those aged 50 and above. Overall, it hopes that up to 99% of people most at risk of dying from Covid-19 will have been immunised during the first phase.