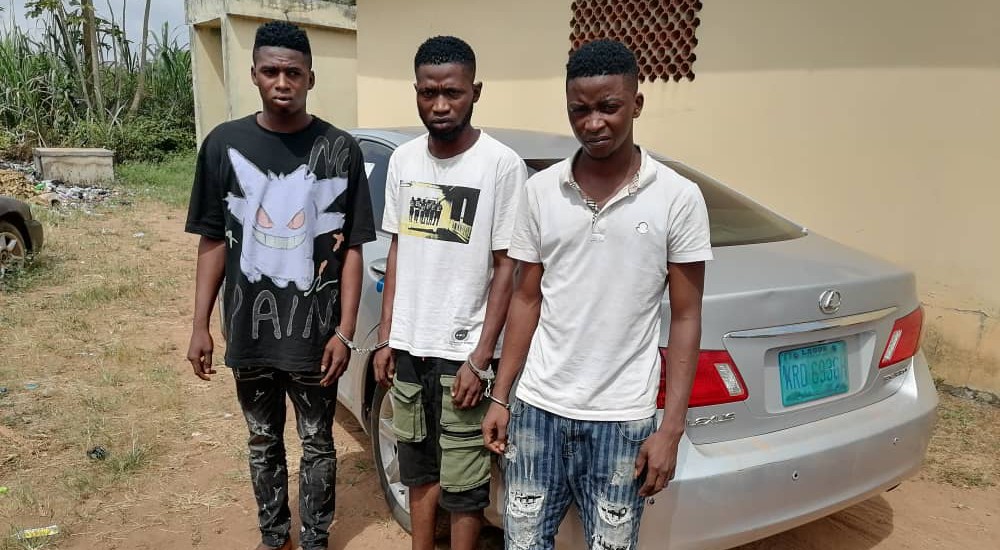 An 18 year-old girl (names withheld), has narrated how she was gang raped by three suspected Yahoo boys in Ilese, Ogun State.

According to the victim, the incident which has been reported with Ilese Divisional Headquarters, Ijebu-Ode, occurred last weekend on her way to Its-Ale area of Ilese-Ijebu.

Unfortunately, she was accosted by three young men who rode in a Lexus ES 350 car and blocked her.

She said they forcefully dragged her to Rasanwa area where they took turn to rape her at gun point.

The victim who managed to put herself together said she quickly incidented the report with the Police waiting for the next line of action.

On receiving the report, the Divisional Police Officer, Ilese Division, Yakubu Bala, mobilized his detectives and stormed their hideout where one of the suspects was arrested.

The arrested one led the Police to his colleagues afterwhich they were subsequently arrested.

Confirming the incident, Ogun State Police Public Relations Officer, Abimbola Oyeyemi said on interrogation, the suspects confessed to the crime claiming to have believed that the Police are no longer working, hence crimes can be perpetrated at anytime but were surprised when Police came after them.

He said the Commissioner of Police, CP Edward Awolowo Ajogun has ordered the immediate transfer of the suspects to State Criminal Investigation and Intelligence Department for further investigations and prosecution.

Also, the CP warned that those criminals who have been subdued will meet their Waterloo in no distance time.