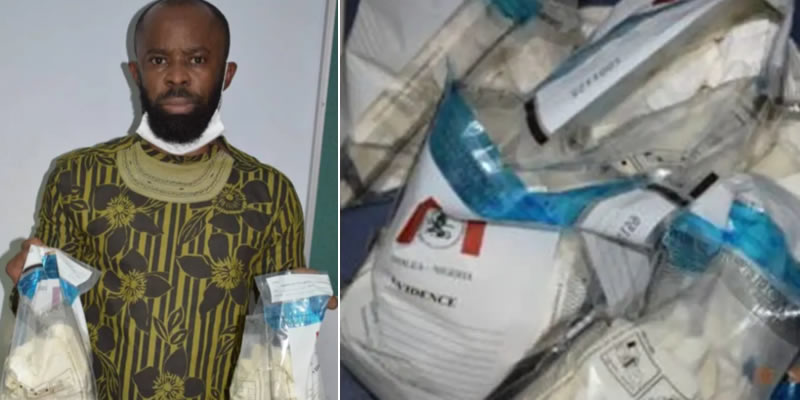 The National Drug Law Enforcement Agency (NDLEA) has uncovered two new methods drug traffickers now adopt to evade the prying eyes of law enforcement personnel and this had led to the seizure of 14.4kg of cocaine.

He noted that the command intercepted a consignment of four packets of chocolate sweets of white substances, weighing 7.2kg, which tested positive to cocaine in the first operation.

He added that NDLEA operatives also uncovered 12 parcels of cellophane wrappers, weighing another 7.2kg, with whitish substances which also tested positive to cocaine in the second operation.

“The first operation involved Da -Silva Mailson Mario, a Brazilian aged 23, who was arrested with a suit case containing the packets of the chocolate sweet.

“This was during the inward clearance of Ethiopian Airline ET 911 which originated from Brazil en-route Addis Ababa to Abuja.

“The second operation involved Elechi Adendu Kingsley, a Nigerian aged 39, who was arrested with a bag containing cellophane bags during the inward clearance of Ethiopian Airline flight ET 911, ” he said.

Achema said that Mario, the first suspect who spoke through an interpreter, decided to be silent on all questions put to him adding that he was only inquisitive about the jail terms his alleged offence might attract in Nigeria.

He said that Elechi, the second suspect, an indigene of Umulolo Local Government Area of Imo State who has been living in Brazil for the past 13 years said he would not blame anybody for his involvement.

He said “I am an adult and I am fully aware of what I was going into. I agree that somebody gave it to me but I offered to carry it, ” Elechi says.

Achema said that Elechi confirmed that he was promised N3 million upon safe delivery of the drugs to somebody in Nigeria adding he was in Nigeria preparatory to his wedding in January, 2021.

The Commander, NDLEA Nnamdi Azikiwe International Airport, Mr Kabir Taskuwa, said there was no underestimating the imagination of drug merchants.

“What is expected of us is not only to counter their devices but to think ahead of them.

As we can see, any step they take, we are many steps ahead, hence the results we are seeing. I wish to promise them more frustration, ” he said.