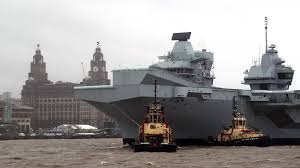 France on Saturday shrugged off plans by Britain to deploy naval vessels to protect its fishing rights in the wake of a possible no-deal Brexit.

“Keep calm and carry on,” an Elysee official said, resorting to a British wartime slogan in response to London’s decision to assign four Royal Navy patrol vessels if the Brexit transition period ends without a trade agreement.

There are concerns about possible skirmishes between British and foreign fishing vessels if no trade deal is reached, with existing transitional rules that give EU boats access to British waters set to expire at the end of the year.

Britain earlier announced it had readied four 80-metre (260-feet) vessels to guard British waters from EU trawlers in case the two sides decide to abandon efforts to secure a free-trade agreement on Sunday.
The development is part of increased contingency planning on both sides of the Channel, and evokes memories of the “Cod Wars” with Iceland over fishing rights in the North Atlantic in the 1960s and 70s.

The British navy vessels will have the power to stop and inspect EU fishing boats operating within Britain’s exclusive economic zone (EEZ), which can extend 200 miles (320 km) from shore.

The Guardian newspaper reported earlier that two vessels would be deployed at sea with a further two on standby in case EU fishing boats entered the EEZ.

A French minister said on Thursday that France would compensate its fishermen and take other measures to help them if talks on a trade deal collapsed, in an effort to avoid clashes at sea.

Britain quit the EU in January, but under the terms of its exit deal remains part of the bloc’s single market and customs union until a transition period expires on Dec. 31.