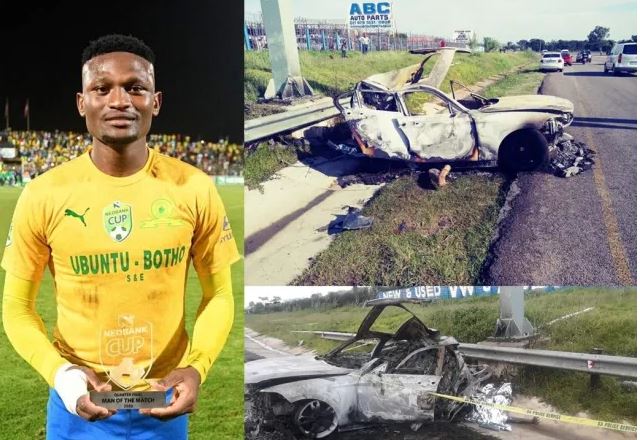 The 25-year-old star was one of two occupants of a car that went out of control, hit an advertising board and burst into flames in eastern Johannesburg, according to the official, who requested anonymity.

“I spoke to someone who arrived at the crash scene soon after the accident and he described a horrific scene with one body burnt beyond recognition,” he said.

“Motjeka apparently managed to crawl out of the burning vehicle, but was declared dead by medical personnel at the scene of the accident.”

Madisha is the second Sundowns defender to die in a car accident within two months after Anele Ngcongca, near the eastern city of Durban.

Ngcongca spent nine years with Belgian club Genk and was loaned to French outfit Troyes before returning to South Africa four years ago.

Madisha was capped 13 times by South Africa on the back of becoming an established first choice centre-back in a Sundowns team that has been among the strongest in Africa during the past five years.

Known as ‘The Brazilians’, they won the 2016 CAF Champions League and have been semi-finalists once and quarter-finalists twice since.

Sundowns won the Premiership-FA Cup-League Cup treble in South Africa last season and are top of the table after six rounds of the new league campaign.

READ  Photos: Angry Nigerian Man Breaks His LED TV After Loosing A Bet Of N700k During Nigeria Vs Algeria
Share this Post[?]