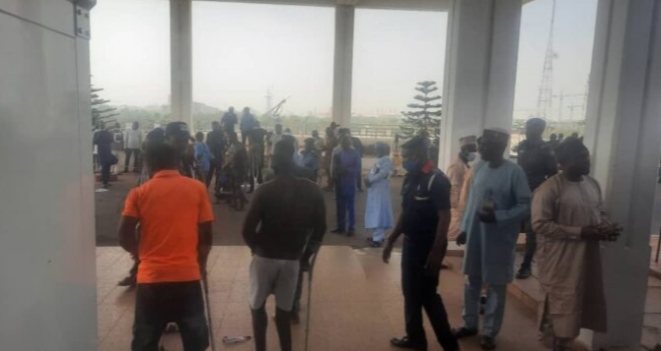 Persons with disabilities (PWDs) reportedly stormed the national assembly and overpowered security at the complex.

Police officers fired tear gas on the protesters as they made their way to the main lobby of the assembly.

Angered by the action of police, the protesters removed their clothes and attacked a sergeant-at-arms with their crutches and a chair.

A leader of the protest, Rawlings Etim said they were demonstrating because members of the senate and house of representatives who promised to meet with them failed to do so.

Etim who came from Rivers state to Abuja said they are demanding what is theirs because they have been marginalised.

“We are representatives of the Niger Delta. We came here to demand for what is ours because in everything we have been marginalised – even jobs we don’t have. We were here when the disability bill was passed into law but since we gave these people our proposal they have not listened to us,” he said.

“Presently what is causing this confusion is that our delegates came yesterday and they had a good dialogue with the senate and the house, and they were told that they would be provided with a Hilux to pick up only the executive to come meet with them for a dialogue.

“We have waited, nothing. This is why we are here.”

On his part, Abdullahi Sabi, senate deputy chief whip, said there was a mix-up with the time.

Sabi said the lawmakers will meet with them and address their concerns.

“We are here on behalf of the senate of the federal republic of Nigeria,” he said.

“Yesterday we were supposed to see you but there was a mistake in the timing. It is not that we did not plan to see you.”