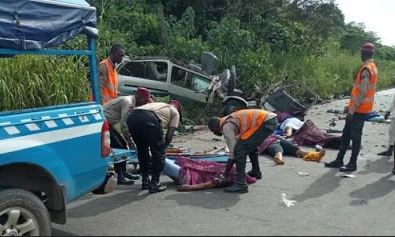 Six lives were lost and four people were injured following the tragic accident.

The death of six persons in a tragic auto-crash around Bida/Kutigi road on Thursday, November 17, has been confirmed by the Federal Road Safety Corps, Niger Sector Command.

He said that the lone accident, which occurred at about 15.20 hours at Jifan village along Bida-Mokwa Highway in Bida Local Government Area, involved a bus with registration number JJJ 132 XV.

“Twelve people were involved in the mishap; six were killed, four sustained injuries and were taken to General Hospital Kutigi.

“The corpses were given to their relatives for burial,’’ Dagwa told NAN.

He explained that the bus took off from Bida, heading towards Kutigi when the accident occurred.

The sector commander blamed the accident on speed violation leading to loss of control.

He advised motorists to exercise caution and adhere strictly to speed limits to avoid crashes.

The sector commander said that the corps would continue to monitor road users to guard against dangerous driving.