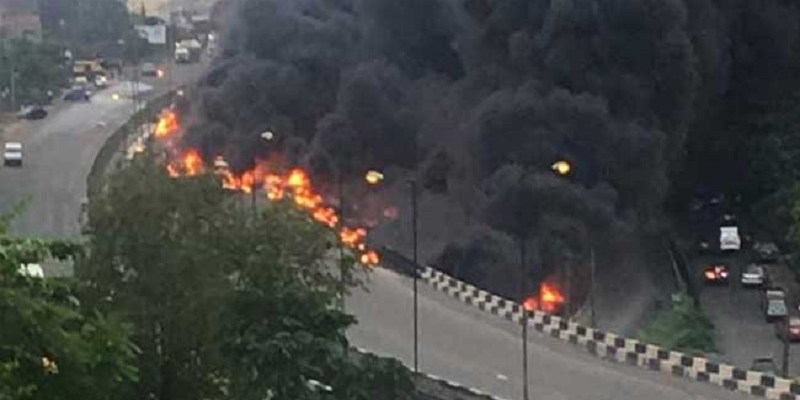 The incidence and prevalence of gas and tanker explosion in Nigeria have been occurring at alarming rate over the years.

Saturday (today) evening, a tanker has exploded on the Otedola bridge in Lagos which is on the Lagos Ibadan Expressway, a route used by commuters living on the outskirts of the city.

The tanker which was laden with petrol exploded twice before going up in flames. This incidence is the fourth this year.

As at the time of filing in this report, the Lagos State Emergency Management Agency, has arrived the bridge but they are yet to put out the fire.

The fire incidence occurred when a fuel laden tanker was attempting to climb to bridge, outward Lagos and somehow collided with a vehicle, causing an explosion.

Both the fuel tanker and the vehicle went up in flames forcing most vehicles to make a detour into the Omole Phase II estate opposite the bridge to connect to the other side of Ojodu/Berger.

See video as posted on Twitter by a social media user below:

Tanker explosion on otedola bridge. Find an alternative route if you're going towards there. Stay safe pic.twitter.com/AF1V3PBXUH

The last explosion that occurred on the bridge happened only two months ago. In 2018, a tanker explosion burnt over 50 vehicles and claimed several lives. The tanker crashed into a passenger car and caught fire on a busy bridge.

A fuel laden tanker had stopped to fix a leak where the fuel was trickling out and a commercial bus ran into it which caused the fuel to ignite. People abandoned their cars and ran, and those closest to the tanker were simply merged into a wall of fire.