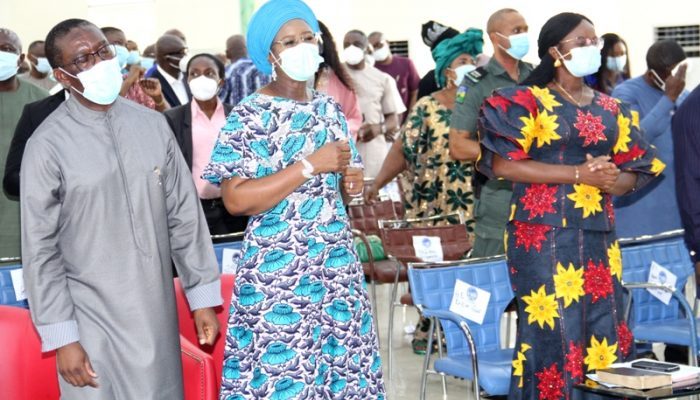 Okowa made the call at a Special Thanksgiving Service by him and his family at the Government House Chapel, Asaba.

He stated that insecurity and the persisting downturn in the economy of the nation appeared to be overwhelming relevant authorities, adding that God’s intervention through intensive supplications by citizens was required for respite on the issues.

“There is insecurity in the land and Delta is not an exception but God will continue to intervene.

“The present insecurity in the country is greater than the presidency and the governors; it requires God’s intervention, and therefore, we must continue to pray for God to intervene.

“We are here to give thanks again because not too long ago, I had thanksgiving. The Lord has been faithful and remains faithful to me, my family and Delta State.

“I recognise the many challenges of this year. We saw something we had not seen before; it’s COVID-19 and it’s still on.

“At a time people thought it was about going, but the second wave is back all over the world and Nigeria is not spared. There is reason to give thanks to God over our lives because a lot of people are dying daily.

“As Nigerians, we have not seen what people are seeing in those parts of the world being ravaged by the pandemic. His grace abounds and has continued to sustain us and we do not need to take it for granted.

“The COVID-19 has impacted negatively on our economy and beyond all these, we are still alive. God has kept us,” he said.

The governor recalled that many things happened in the course of the year, but said that as with religious injunction, “in all things, we must give thanks to God”.

He prayed that God would continue to touch every life in Delta as He has touched his family.

“When all hope is lost, He makes a way out of every predicament that we find ourselves.

“It is always good to be hopeful in the Lord and trust in his ways to turn things around for our good.”

Okowa appealed to Deltans, including leaders to continue to partner each other in the interest of the state.

He advised that people in positions should endeavour to be servants of the public, saying: “It is important that wherever we are, we are called to serve and not to be a boss. It is only by God’s grace that I am privileged to be the governor; it could have been anyone else.

“Let us continue to work collectively as partners to ensure that we impact on the lives of Deltans.

“It is my prayer daily that God will continue to grant me the wisdom to lead by example so that others will be encouraged to live rightly.”

The governor hinted that the second wave of COVID-19 had hit the state and warned the people to be cautious.

READ  US Covid-19 death toll surpasses quarter of a million

He advised that citizens must fully return to wearing of the mask and maintaining of physical distancing, saying: “For the churches, the second wave has come and we must all wear masks; just two days ago we had 10 positive cases in one day here in Delta.

“As we enter the festive season, we must continue to obey all the preventive protocols and we must limit public gatherings. We are not stopping people from going to church but they must wear mask.”

He commended the outgoing local government council chairmen in the state for their efforts in enthroning good governance and appealed to Deltans to pardon them for their shortcomings.

Chaplain of the Government House Chapel, Venerable Charles Osemenam, in a sermon titled “The mystery of thanksgiving” said Christ expected humans to give thanks to God all the time.

He said that “when we thanked God for any situation, He makes things better.”

Making reference to Bible book of Luke 17: 11-19 which talks about the healing of 10 lepers by Jesus Christ, but only one returned to praise God, Osemenam said: “It is important that we reflect on the question, ‘where are the nine?’”

He said that God expects humans to show appreciation at all times, adding: “When you thank God from the depth of your heart, doors would be opened to you and insufficiency would turn to overflowing abundance.

“Thanksgiving makes stars out of nobody and let me remind us that a proud man does not give thanks and doesn’t show appreciation to God or to man.”

“Thanksgiving makes for perfection and when you show gratitude for the little received, God multiplies it,” he added.