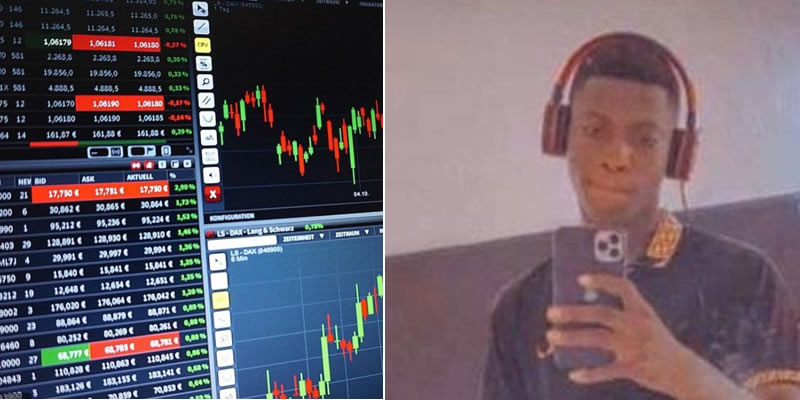 A 19-year-old University student named Gbenga Favour Olaoye-Akanbi has taken his own life after he lost the sum of 300 million naira to forex trading.

It was gathered that Gbenga was until his death a 300-level student studying Agriculture at the University of Ilorin.

The deceased was reportedly duped by a certain forex trader named, Eseka Vhukwutem Gospel (ESG) who was his partner.

A family member disclosed in an interview with Sahara Reporters that there were other people involved in the trade and they were all under pressure to pay back their debtors but Gbenga couldn’t withstand the pressure.

“The investment is forex. The guy’s name is Eseka Chuckwutem Gospel. We started the investment together this year. It seems he stopped trading, so he turned indirectly to a Ponzi scheme without the knowledge of those investing.

“Later on, the investment crashed, and the guy was arrested. With the help of some senior police officials, he was released. So over time, people that were with ESG as investors ( they had borrowed money to invest) were now being pressurized to repay the loan they took. I am one of the investors, too; we were under a lot of pressure to pay up. So I think because of this guy’s age, he is just 19-year-old, he couldn’t withstand the pressure and committed suicide.”

READ  If heaven is where Adeboye, Kumuyi and others will go, then I don’t want to go there – Facebook User

A coursemate of the late Gbenga also revealed that the deceased borrowed 5 million from him and promised to pay back before December but he was taken by shock when he heard of his death.

A course mate of the deceased said he assured them that forex is not a Ponzi scheme and that he had back up funds, much enough to pay every one of his investors their capital and profits even if things went wrong.

“It’s so sad; I have over N5m investment deal with him. He claimed to be the one doing the trading initially, but when the problem started around June, he started mentioning one Eseka Chuckwutem Gospel as his boss. He told us they were arrested together, but that our money was safe with him.

“He later promised to pay everyone’s capital before December. I was surprised when I saw people posting his pictures with RIP today,”