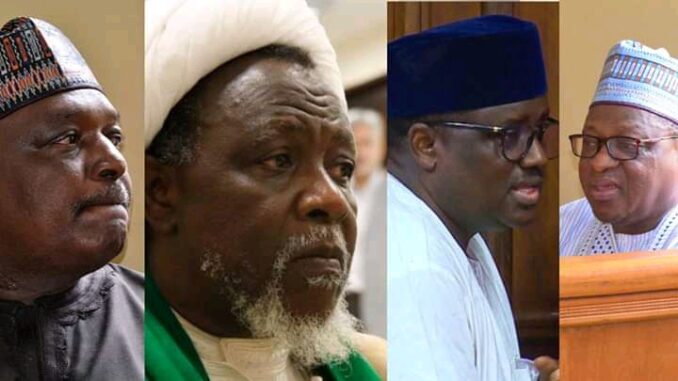 Yesterday, Christmas was celebrated by devoted Christians who believed in the gospel of Jesus Christ. As special as Christmas is and a special day synonymous with merrymaking, some Notable Nigerians celebrated the day in detention or behind the bars of prison cells.

These influential Nigerians did not celebrate 2020 Christmas with their families rather they spent it all alone in their respective holdings.

Below are names of some influential figures who spent their Christmas in cells. A top shot currently in prison is Joshua Dariye, a former Governor of Plateau State.

A Federal Capital Territory (FCT) High Court had in June 2018 sentenced Dariye to 16 years in prison for N1.126 billion fraud. He was to serve two-year and 14-year jail terms concurrently, with no option of fine, but a Court of Appeal reduced his term by four years.

He was convicted for two main categories of offences, namely criminal breach of trust and criminal misappropriation.

In 2007, the Economic and Financial Crimes Commission (EFCC) charged him with money laundering, accusing him of diverting the amount from the Plateau government’s ecological fund through Ebenezer Reitner Ventures, an unregistered company. Though a Muslim, Ibrahim El-Zakzaky, leader of the Islamic Movement in Nigeria (IMN), on Friday spent his sixth consecutive December 25 behind bars. El-Zakzaky and his wife, Zeenat, were arrested by security operatives on December 14, 2015, after a clash between his followers and officers of the Nigerian Army.

At least 500 Shiites were killed during the incident with no army officer charged for the crime ever since.

But, El-Zakzaky and Zeenat have remained in detention despite several court orders for their release.

They are both facing eight counts of culpable homicide, unlawful assembly and disruption of public peace, among others.

The government accused the IMN of not recognising the Nigerian constitution and authority.

His prolonged detention has fuelled several protests by members of the Shiite movement in many Nigeria cities. Another convict who probably had his Christmas meals inside the prison is Jolly Nyame, a former Governor of Taraba State

Upon leaving office in 2007, Nyame was charged by the Economic and Financial Crimes Commission (EFCC) for a fraud of N1.64 billion in 41 counts of fraud.

In 2007, the former governor admitted to misappropriating N180 million out of N250 million meant for stationery in Taraba State and offered to return the same.

On May 30, 2018, Nyame was convicted by the High court of the Federal Capital Territory, Abuja, under the ruling of Justice Adebukola Banjoko for the charges against him and was sentenced to 14 years in prison. He was also asked to refund the monies he diverted.

In November 2018, The Court of Appeal in Abuja affirmed his conviction on 29 counts.

The Appellate court however reviewed the sentences imposed by the trial court and sentenced him to five separate 12-year jail terms which were to run concurrently instead of the initial 14-year jail term, and ordered him to pay a fine of N185 million.

On 7th February, 2020, the Supreme Court affirmed the 12-year jail term judgment and set aside the fines imposed on him by the courts on the grounds that they were outrageous and done without any prompting.

Four months after, the former pension chief was declared wanted by the EFCC for N2 billion Pensions Biometric Scam after he fled to Saudi Arabia.

Maina was arraigned before Justice Okon Abang of the Federal High Court, Abuja on October 25, 2019, by the anti-graft agency alongside his firm, Common Input Property and Investment Ltd.

Although he is now facing 12 counts bordering on money laundering to the tune of N2 billion, he had pleaded not guilty to all the charges.

Maina was extradited to Nigeria after his arrest in Niger Republic in November 2020. He had jumped bail, leading to the arrest of Ali Ndume, a serving Senator, who stood as his surety.