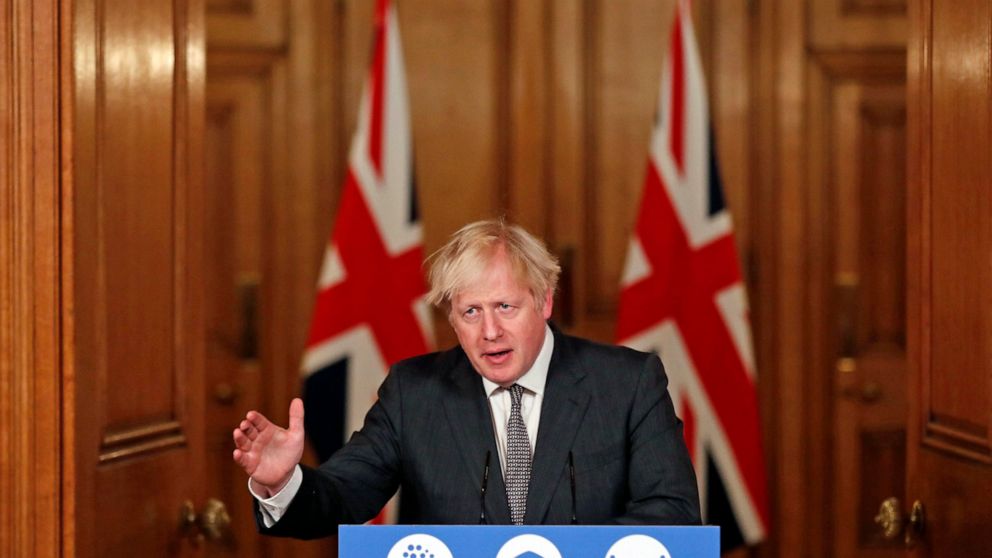 Prime Minister Boris Johnson on Monday announced a six-week lockdown for England’s 56 million people, including the closure of schools, after a surge in coronavirus cases brought warnings that hospitals could soon face collapse.

Johnson stressed that Britain was leading the way with the introduction of two vaccines, including one from Oxford University and AstraZeneca which started its rollout on Monday.

All priority groups should get their jabs by mid-February, he said in a nationally televised address, insisting that “we are tilting the odds against COVID-19 and in favour of the British people”.

“But for now I’m afraid we must once again stay at home, protect the National Health Service (NHS) and save lives,” said Johnson, adding the lockdown would take effect early Wednesday and remain in place until mid-February.

The prime minister had been under pressure from scientists, opposition parties and the UK’s devolved nations to act more decisively. Earlier in the day, Scotland said it would lock down again for the rest of the month.

In a race between the inoculation campaign and COVID-19 , the spread of a new variant strain of the virus is threatening to win, the UK’s chief medical officers warned as they elevated a national alert level to the maximum five.

On Britain’s emergency alert scale, that signals a risk of health care services being overwhelmed within 21 days without urgent action.

The new lockdown announced by Johnson emulates the first national curbs in place from March to June, and goes further than another instituted in November, when schools were allowed to stay open.

The decision means summer exams are unlikely to go ahead, the government conceded, bringing months of uncertainty for millions of families including those of pupils hoping to head on to university.

But unlike the first lockdown last spring, elite sports including Premier League football will continue.

The first time around, Britain kept its borders open to international travel. But the government said it was now reviewing whether to take action on inbound flights after another new strain emerged in South Africa.

Officials underlined the severity of the spread now compared to last spring, owing to the variant which emerged in southeast England.

Hospital admissions are now 40 percent higher than the spring peak reached on 12 April. On 4 January, there were 26,626 COVID-19 patients in hospital in England – an increase of more than 30 percent on the same day a week before.

“We are not confident that the NHS can handle a further sustained rise in cases and without further action there is a material risk of the NHS in several areas being overwhelmed,” the UK medical officers said.

Britain – one of the worst-affected countries by the global health crisis, with over 75,000 deaths – has been pinning its hopes on the mass vaccination drive.

But more than 50,000 positive cases were recorded across Britain every day for the last week.

Some 44 million people – more than three-quarters of England’s population – had already been advised to stay at home and work remotely under a patchwork of regional restrictions.

With the new lockdown, all non-essential shops will be shut across England, along with bars, restaurants and other hospitality and entertainment venues.

The House of Commons has been recalled from its Christmas and New Year break to vote on the new measures on Wednesday.

The leader of the main opposition Labour party, Keir Starmer, signalled his support for the lockdown after slamming the government over the weekend.

The announcement overshadowed the first Oxford/AstraZeneca vaccine given to a member of the public outside a clinical trial.

Brian Pinker, 82, a retired maintenance manager on dialysis for kidney disease, got the shot at an Oxford hospital, and said it was “the only way of getting back to a bit of normal life”.

Some 530,000 doses are to be administered at new vaccination sites across Britain, adding to those already giving the Pfizer-BioNTech jab since early last month.

Britain became the first country in the world to approve the use of a vaccine produced by Pfizer-BioNTech on 2 December, and has already given nearly one million people a first dose.

The Oxford/AstraZeneca vaccine is far cheaper than its rivals, costing about £2.50 ($3.40, 2.75 euros) per dose, making it affordable for developing countries.

It can also be kept in the fridge, while Pfizer-BioNTech’s requires storage at ultra-low temperatures.