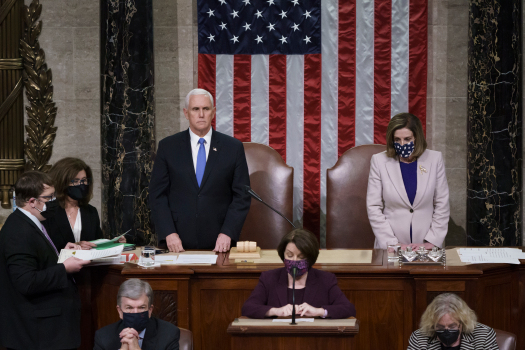 Congress formally certified President-elect Joe Biden’s Electoral College victory, with lawmakers returning to finish the process hours after being rushed out as a mob stormed the U.S. Capitol in a riot that resulted in one person being fatally shot by Capitol Police.

Vice President Mike Pence closed out the proceedings early Thursday morning, hours after police had hurried him out of the Senate chamber with rioters inside the Capitol. He read out the tally of the 538 votes from the 50 states and the District of Columbia, cementing Mr. Biden’s win with 306 electoral votes to President Trump’s 232.

Mr. Trump issued a statement committing to an orderly transition of power to Mr. Biden on Jan. 20.

“While this represents the end of the greatest first term in presidential history, it’s only the beginning of our fight to Make America Great Again!” the statement, released by the White House, said. He added that he continued to “totally disagree with the outcome of the election.”

On Wednesday, hundreds of people echoing Mr. Trump’s unproved claims that Democrats stole the 2020 election gathered ahead of a last-ditch effort from his congressional allies to contest the results in Congress. Those demonstrations turned violent, with rioters barging their way past police and into the Capitol, forcing lawmakers to shelter under desks and the evacuation of congressional leaders to nearby Fort McNair, a U.S. law-enforcement official said.

With rioters roaming freely in the Capitol, police sealed off the House and Senate chambers, using furniture to barricade the doors in the House. Several police officers drew their weapons, distributing gas masks and instructing lawmakers to stay on the floor until they could be safely evacuated.

A woman who was shot during the unrest in the Capitol died, D.C. police said.

The certification process is usually low drama, but some Republicans had planned to object to electoral votes in several states that Mr. Trump lost in a last effort to support his protest of the election result. Before the riot, a handful of Republicans had objected to certifying Arizona’s electoral votes, but later Wednesday some dropped plans to pursue subsequent challenges.

By the end of the proceedings, both the House and the Senate had rejected challenges to results in Arizona and Pennsylvania, and no senators signed on to challenges in Georgia and other states.

“When I arrived in Washington this morning, I fully intended to object to the certification of the electoral votes,” Sen. Kelly Loeffler (R., Ga.), who was to take the lead on objecting to results from Georgia, said on the Senate floor Wednesday night. “However, the events that have transpired today have forced me to reconsider, and I cannot now in good conscience object to the certification of these electors.”

The violent scenes, playing out in real time across the nation on cable television, represented a stunning coda to Mr. Trump’s presidency as Congress assembled to certify his opponent’s win. Washington sees frequent political demonstrations and skirmishes. But scenes of rioters confronting police on the Capitol steps, scaling the sides of the iconic building and sitting in lawmakers’ chairs prompted outrage among Washington lawmakers and officials.

Senate Majority Leader Mitch McConnell (R., Ky.) called the rioting a “failed insurrection” and said returning to finish the certification process would send an important signal about the strength of the country’s political institutions. Senate Minority Leader Chuck Schumer (D., N.Y.) said Wednesday would join “that very short list of dates in American history that will live, forever, in infamy.”

The day took a toll on Mr. Trump’s Senate Republican supporters, who took him to task in ways that were rare throughout his presidency.

“It’s past time for the president to accept the results of the election, quit misleading the American people, and repudiate mob violence,” Sen. Tom Cotton (R., Ark.) said in a statement.

It took hours for police to secure and clear the Capitol building. Mr. Pence presided over the U.S. Senate as it reconvened around 8 p.m. to restart the electoral vote debate and count. The House reconvened about an hour later.

“To those who wreaked havoc in our Capitol today, you did not win,” Mr. Pence said. “Violence never wins. Freedom wins. And this is still the people’s house.” He added: “Let’s get back to work.”

The Senate then overwhelmingly voted down a push—launched before the rioting—by a group of Republicans to void the presidential election results from Arizona. The tally was 93-6. A dozen or so GOP senators had been expected to object before the day’s violence. The House followed suit, defeating the measure despite strong support from GOP lawmakers. House Minority Leader Kevin McCarthy (R., Calif.) and 120 other Republicans supported the losing effort.

Headed into the day, Republicans also had planned to force votes on Georgia and Pennsylvania. Following the day’s events, GOP senators dropped their objections to Georgia’s results, ending the challenge. But Sen. Josh Hawley (R., Mo.) moved ahead with House Republicans in a challenge to Pennsylvania’s results. That effort was defeated 92-7 in the Senate, and 282-138 in the House.

READ  Obasanjo reveals what Atiku did when he was vice-president

Speaking on Wednesday morning to supporters before the demonstrators had entered the Capitol complex, Mr. Trump urged them to keep up the fight against the election results and march to the Capitol.

In a short video posted on Twitter after skirmishes between police and the rioters, Mr. Trump asked that the demonstrators remain peaceful, though he continued to embrace the cause of overturning the election.

“We have to have peace, so go home. We love you. You’re very special,” Mr. Trump said of the rioters.

In his own remarks Wednesday, Mr. Biden called on Mr. Trump to tell the rioters to stand down. “This is not dissent. This is disorder. It’s chaos. Borders on sedition and it must end now.”

Mr. Pence opened the joint session, in which states are counted alphabetically. When he got to Arizona, several GOP lawmakers from the House and Senate objected, as expected. Lawmakers then moved to debate the matter in their separate chambers and vote.

Trump gives speech near the White House at ‘Save America Rally’, afterwards instructing attendees to march down Pennsyvlania Ave.

Rioters gathered on the Capitol lawn as the Senate began to vote on certifying the election results.

U.S Capitol and surrounding buildings were put under lockdown

As the joint session began, Mr. Pence issued a letter ruling out any effort by him to intervene on Mr. Trump’s behalf, defying repeated requests from Mr. Trump to throw out the results of the election. After the letter was released, Mr. Trump tweeted that Mr. Pence “didn’t have the courage to do what should have been done.”

Moments later, Mr. McConnell said any move to overturn the results would cause a “death spiral” for democracy. He said that there was no evidence of fraud “anywhere near the massive scale that would have tipped this entire election.”

Leaders of the effort to contest the election results cast their actions as a way to ensure the legitimacy of the 2020 results, rather than diminish them. Some Republican lawmakers who didn’t sign on to contesting the results have faced crowds of constituents criticizing them.

As debate began in the Senate, Sen. Ted Cruz (R., Texas) addressed fellow Republican senators who were planning to vote against their colleagues’ objections. Mr. Cruz has pushed for an emergency 10-day commission to study the allegations of voter fraud. No evidence of widespread voter fraud in the 2020 election has emerged.

“I understand your concerns but I urge you to pause and think, what does it say to the nearly half the country that believes this election was rigged if we vote not even to consider the claims of illegality and fraud in this election?” Mr. Cruz said.

But the process—already a fraught battle that lawmakers had expected to last late into the night—was quickly interrupted.

Capitol Police initially ordered occupants of several buildings on Capitol Hill to evacuate. As the mob entered the Capitol building itself, the Congress was forced into recess as the police evacuated top lawmakers and attempted to lock down the building.

Some lawmakers questioned how rioters were able to enter the Capitol, and whether the police were sufficiently staffed.

“I think they didn’t plan enough,” said Rep. Vicente Gonzalez (D., Texas) of the Capitol Police. “There should have been an overwhelming display of force.”

The chaos at the hands of the pro-Trump rioters inflamed criticism of Mr. Trump and Republicans who challenged the results Wednesday. Several Democrats said Mr. Trump should be impeached for the second time.

“It’s completely unacceptable what the Republicans are doing, undermining people’s faith in our democracy, like it’s actually being stolen, which it’s not,” said Rep. Jimmy Gomez (D., Calif.). “I think Donald Trump probably should be brought up on treason for something like this.”

As they rushed away from the Senate, parliamentary staff grabbed hold of the boxes containing the Electoral College certificates. Relocated to an undisclosed secure location, evacuated lawmakers said a prayer, several kneeling or with heads bowed.

Republicans who led the effort to contest the election results also condemned the rioting, which prompted the city of Washington to institute a curfew beginning at 6 p.m.