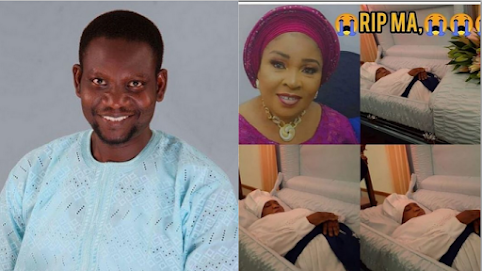 Actor and movie producer, Afeez Owo has shared a photo of late actress Folake Aremu aka Orisabunmi’s corpse on social media and that act has gotten him into trouble with some of his fans.

“It is so sad we lost a Priceless Jewel, a very rare gem in the Nigerian film industry, Chief Mrs Folakemi Aremu, aka Orisabunmi, to the cold hands of death last night.” he wrote.

Mourning her moments ago on Instagram, Afeez Owo shared a photo of her corpse in a coffin and many of his followers found it quite offensive.

One Captain Ade wrote “Posting this kind of pic is so wrong.Kindly take it down Sir as this isn’t even good for the sight.We didn’t see any of her post on your pages when she was alive.Kindly pull down this image and it is demeaning and allow the dead to rest.”

One Ike wrote “This picture is wrong ooo….d person in the coffin is not orisa bunmi…”

Born on October 10, 1960 in Kwara State, Orisabunmi became popular for her role in the 80s TV series Arelu starring her husband and others like Ojo Arowosafe, popularly known as Fadeyi Oloro.

Jimoh and Folake Aliu had a rocky marriage and were separated for two decades before Aworo died in September 2020.

Although they were no longer and wife, they continued working together as professionals and friends.

She attended his 85th birthday celebration in Ibadan, the Oyo State capital on December 19, 2019.

Speaking in an interview with PUNCH shortly after Aworo’s death, Orisabunmi said: He was a good man; he was a father to me, not a husband. “He was my mentor. After God, he was responsible for my progress.

“I pray to the Lord to accept him. May his good works never be wasted!”