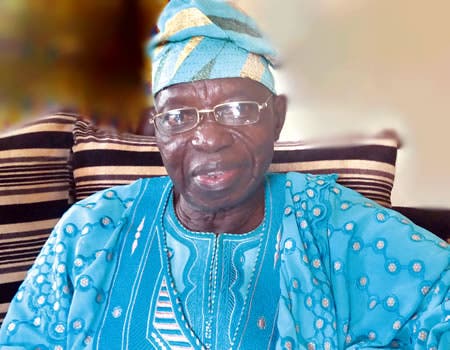 FOR a movie icon like Chief Lere Paimo, the industry has lost its essence to obscenity while also ignoring the constant advice given by elders. Eda Onile Ola as he is fondly called explains why he has been off the scene for sometime, his plans to build a generation of professional actors, among other issues. ADENIYI ADEWOYIN caught up with him in Abeokuta, Ogun State.

YOU’VE been off the movie scene for some time, why is that?

Firstly, I travelled abroad for some time and when I came back, some of our junior colleagues said they created a new association called TAMPAN so they stopped inviting us for jobs. They said they are supporting a particular person but they don’t know that whoever blocks one’s way of survival has done great damage. I can’t curse them because they are all our children. That is why you have not been seeing me in movies. Moreso, we cannot be in some of the movies they produce these days due to their script, we can’t be party to such movies. I have been in my space and God has been faithful in every way.

Are you saying categorically that you stopped getting movie scripts because of the creation of TAMPAN?

Those that created TAMPAN were our members from ATNP but I am not angry. They are the ones who know why they decided not to invite us for movies anymore. They were called to order but they were adamant which does not affect me in any way because what God has done for me he hasn’t done for many of them.

So in a nutshell, you have retired from acting?

I am still acting, I just finished a one year production for Galaxy, some heavy weights still call me for jobs.

A lot has been said about nudity in modern day Nollywood movies, what would you advise?

There is no amount of advice we would give to them, they won’t listen because many of them lack training. Nudity, bleaching and vulgar languages in movies is wrong, Yorubas don’t do that, we did not do such when we started acting up till now. Some of them listen to advice while some turn deaf ears.

But change is constant, most of these things happen in real life, people now go half nude and bleach their skin

It doesn’t happen before, the Yoruba lineage are not nudists, they (actors) teach the wrong lessons thinking people would like what they are doing. It is wrong for a Yoruba person to bleach, guys use earrings and sag their trousers like mad people. Those are not Yoruba heritage.

How can historical movies be revived?

They don’t have the brain to write such movies like that. For instance, my movie, Ogbori Elemoso and others like Saworo Ide. We did our research and met the elders to produce such movies. Is it the disrespectful children that would go to the elders to make research? In those days, we respect our bosses and not them alone, we respect our seniors but they disregard every one and we have been cautioning them to respect their elders. After my proposed foundation, Eda Onileola Foundation, which I plan to launch in March 2021 by God’s grace, I intend to start a school of acting with the money I would realise there to teach young people our type of job, dancing and how to write powerful stories because these stories must teach some lessons.

Some people believe historical movies don’t generate much money, that is why they don’t produce them, how true is this belief?

That is a big lie, my movie, Ogbori Elemosho gave me a lot including my MFR status with the likes of Dangote, Mike Adenuga in Abuja some years back. Just three days ago, the Chartered Institute of Commerce conferred me with a doctorate degree, I am now Chief Dr Lere Paimo. All these are results of my works. I built a house from acting, bought cars and sent my children to school so tell me what more we want in life.

They are both good and famous but the Yoruba home video lovers show us more love than English.

What is your relationship with your old peers?

Most of them are still alive and we still talk, it’s just that they also haven’t been producing movies lately probably because they don’t have the capability. I pray that things change for good for us all. Coronavirus and Endsars slowed things down a lot but we only found the grace of God.

What do you think about replacing old people in movies with young ones using make-up to play an elderly character?

Thank you. These are among the things we condemn. Painting a young person to act as an old man does not make sense at all when there are elders available to take that role.

How do you relax?

READ  COVID-19: What God Told Me About Closure Of Churches – Oyedepo

I don’t go out, I simply stroll around my house in the evening and take fresh air unlike before that I go out often and get something to drink but age has taken all that away.

What’s your fond memory as an actor?

It’s my gift as a dancer, God blessed me with that ability. I am a very good dancer, I dance better than any of our peers to the extent that in 2017 I was invited to America to celebrate my birthday and I went. They saw my dancing steps and they were marveled. I was compared to King Sunny Ade on the dance floor.