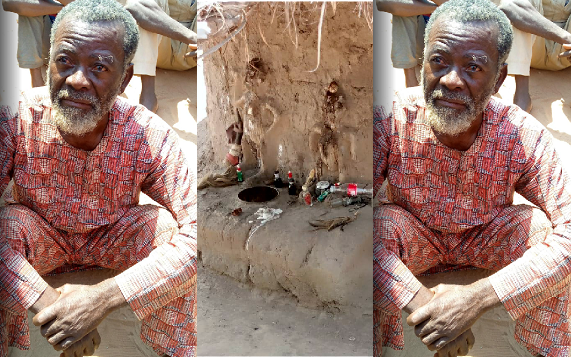 Ugbe Lorlumun, the chief priest of the late notorious robbery kingpin and militia leader in Benue, Terwaze Akwaza a.k.a. Gana, has confessed to be the brains behind the acclaimed supernatural powers of the late criminal.

Lorlumun was arrested by the Four Special Forces Command of the Nigerian Army in Katsina Ala, following which he led soldiers to the shrine where he prepared powerful charms for Gana to operate freely in Benue State.

Recall that Gana met his untimely death on Tuesday, September 8, 2020, having been shot dead by soldiers in controversial circumstances.

Lorlumun had inherited Gana’s gang after the latter’s death and had carried on as the leader until soldiers arrested him in Katsina Ala, the home town of the late dreaded militia leader, last month.

According to a report by the Nation, Lorlumun said he owned a shrine from where he prepared charms with human parts and also owned a human blood boiling pot from which he was able to see the enemies of the late Gana and target them from his shrine.

Speaking with newsmen in Tiv language at the Command Headquarters in Doma Local Government Area of Nasarawa State where he is kept under watch, Lorlumun said he used his shrine to shield Gana from arrest by security agents until he (Gana) voluntarily decided to come out from hiding only to meet his untimely death.

He said: “My name is Ugbe Lorlumun. I am a harbalist and owner of a powerful shrine in Katsina Ala.

“I used to prepare mystical powers for the late Gana. Most of the people he kidnapped were taken to the shrine where they were killed and their body parts use in preparing charms for Gana and his gang members.

“Each time Gana boys were going out for an operation, whether assassination, kidnapping, banditry or any other form of criminal activity, they would come to me to help prepare charms that could make them disappear from danger spots to safe locations.

“I also have a blood-boiling pot in my shrine, which enabled me to see all the enemies of Gana and their plans for him, and that helped him to launch attacks on them.”

It was gathered that between 2015 when the activities of Gana got to its peak and 2020, the chief priest using his blood-boiling pot in the shrine allegedly guided the late Gana in killing the District Head of Mbayongo, Chief Aloo Alvev, as well as the District Head of Michihe, Chief Chiahemba Livinus Shom, both in Katsina Ala Local Government Area.

It was apparently with the help of the shrine also that Gana was able to kill Chief Awua Alabar, the District Head of Kundav in Ukum Local Government Area, who was gunned down in the presence of his family members.

Speaking further, Lorlumun said: “I am a herbalist from Katsina Ala LGA of Benue State. I used to prepare charms for Gana and his boys. Recently, four of his boys came to me and I prepared charms for them.

“I told them that they were too small to carry such charms, so I refused and they threatened to kill me. I was arrested by the military while I was trying to run for my life from the Gana boys.”

Lorlumum recalled that with the help of his shrine and the charms, Gana constituted himself into an alternate government and enjoyed the status of a maximum ruler in the jungle.

The chief priest said he shielded Gana from arrest and the notorious criminal used his shrine to run a sophisticated network of criminals in the Sankara geo-political axis of Benue State, comprising Katsina Ala, Logo and Ukum LGAs.

He confessed that from his shrine, Gana conducted his affairs in commando style and any challenge to his authority was met with death as his blood-boiling pot would locate you.

He said: “We used to kidnap or assassinate people, kill them and use their human parts to prepare mystical powers, though part of his powers was also derived from his small daughter he buried alive.

“With my charms, which allow one to disappear at will, he made life unbearable for the people and those who plied the federal highway between Katsina Ala-Takum and Katsina Ala Zaki-Biam – Wukari in Taraba State.

“When he was declared wanted, I prepared a powerful charm for him and nobody was able to arrest him. He used to move freely in his base in Katsina Ala , Ukum and Logo, and most times, he would be in Gboko but those that were looking for him will not see him.”

He pleaded with the military authorities not to kill him, saying that he had repented. He said he only used his shrine to prepare charms for the late Gana and his boys but never participated in their notorious activities.

In a conversation with newsmen, the Commander of 4 Special Forces Command of the Nigerian Army, Major General Gadzama Ali, said:

“I would like to state that before now, it was unfathomable that Gana’s name would be mentioned among the Tiv, Jukun or Kuteb for fear that Gana, under the direction of his chief priest, would see you in the blood-boiling pot in his shrine and his gang members would go after you.

“Today, I am pleased to inform you that not only did the operation of SFs (Special Forces) snatch the chief priest, I am glad to tell you that the dreaded shrine has been razed to dust.

“The chief priest has been responsible for preparing charms for the gang, using parts of the bodies of kidnapped persons.”