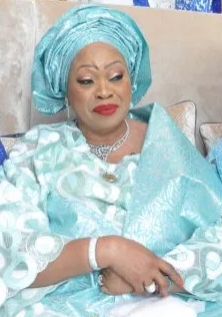 The Adebutu family is yet to issue any statement about the death, but Street Journal, who broke the news, reported that Rosemary died on Saturday morning from Covid-19 complications.

Rosemary is the mother of Temitope Adebutu whose controversial marriage to Jonwo, one of the sons of former president Olusegun Obasanjo, ended barely a year after.

She was said to be hale and hearty but suddenly developed a mild ailment with cold and malaria as symptoms, this weekend.

The ailment soon became severe and she was rushed to St. Nicholas Hospital, Lagos where she was confirmed: “brought in dead.”

Rosemary is now the second wife of the businessman to die within 3 years.

In 2017, the wealthy lotto magnate lost one of his wives, Olaide Abimbola Adebutu.

Olaide was laid to rest at the Ikoyi Vaults and Gardens.