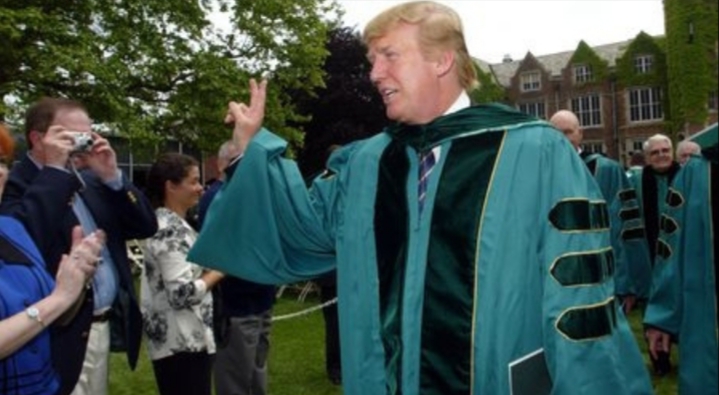 A private school in the New York borough of Staten Island, Wagner College has revoked an honorary degree given to President Donald Trump.

This is coming after Lehigh University, a private school in Pennsylvania also revoked same degree awarded to Trump in 1988.

Individuals including cabinet secretaries and institutions have distanced themselves from Trump since his supporters vandalized the Capitol and disrupted Congress during Wednesday’s certification of the Electoral College count.

According to a statement from the school, a committee of the Lehigh’s board of trustees voted to strip the degree on Thursday January 7, followed by the full board on Friday January 8

Wagner’s trustees on the other hand, met in a special session to review the honorary degree granted to Trump in 2004 and voted to rescind it.

A statement shared by the school read;

“The Wagner College Board of Trustees met in a special session to review the honorary degree granted to Donald J. Trump in 2004. Today, the board voted to rescind that degree.”

Trump spoke at the school’s graduation that year, and appeared at the school with First Lady Melania Trump who was his fiancee at that time. The president was at the height of his fame with the first season of “The Apprentice” and was well-received.

Trump has also been awarded degrees from Liberty University, the school whose commencement he spoke at in 2017, and Robert Gordon University in Aberdeen, Scotland, which rescinded the degree in 2015 amid a uproar over Trump’s comments about banning Muslims from entering the U.S.