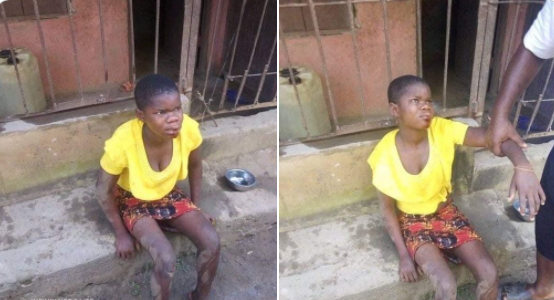 Emeka Igwe, a Nigerian man from Imo state, has been accused of throwing down his househelp from the second floor of a 2-storey building in Aba, Abia state.

According to a Twitter user identified as @obaino_ , who shared photos of injuries the girl sustained, disclosed that the incident occurred at 204 Niger opposite Newday dast food in Aba.

She’s a house help. Her master dropped her from the balcony of the 2nd floor of a 2 storey building Location is 204 Niger opposite Newday dast food Aba Please let’s make this trend and get her justice

“What’s with people treating “housemaids” inhumanly? Why do they always believe they are less as a human being than their bosses are? God Africans. In the first place, this is even a crime because it’s child labour and most likely unpaid. Then attempted murder? Of a child?”

“Damn that’s attempted murder, please get the police and human rights organisations involved, the psycho has to face justice for this evil act.”

“Former slaves becoming slave lords. Their fight for freedom was never about hatred for inhuman treatment, it was a quest to become one themselves. I don’t know why this keeps happening in the East. May God help everyone to raise their kids by their self”