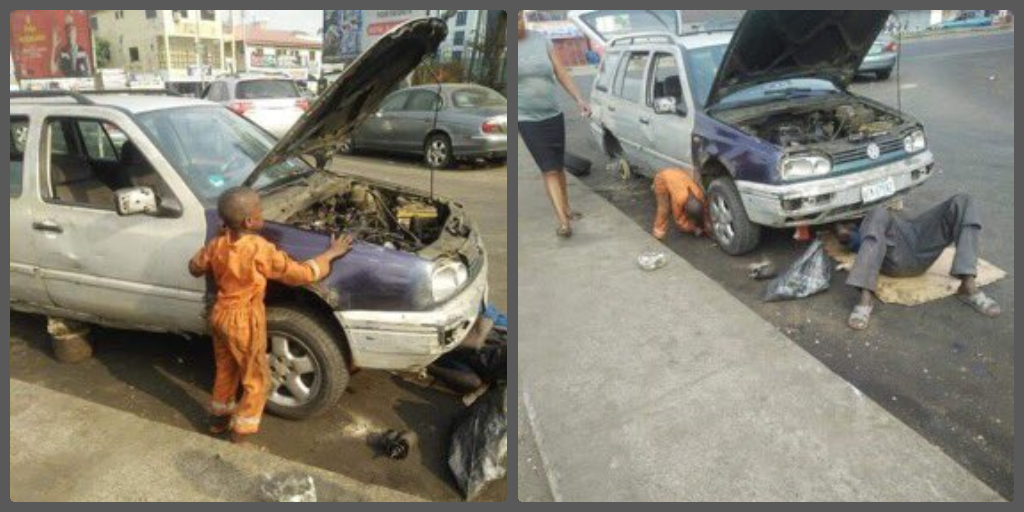 – The little boy could be seen working on a car at a mechanic shop in Port Harcourt, the Rivers state capital

– Some lauded the boy’s embrace of mechanical work at such a young age, while others condemned it Pay

Pictures of a six-year-old mechanic boy has got people talking on social media after they were shared by a user with the handle @CaptDanky.

In the pictures, the boy could be seen in an orange overall working on a golf car alongside an adult. Sharing the pictures on the social media platform, @CaptDanky wrote:

“This 6yrs old boy works In a Mechanic Workshop here in Port Harcourt.

ASUU and Nigeria failed him. “The kid works in a mechanic workshop at Olu Obasanjo Road, Port Harcourt, Rivers State.”

Young Nigerian man packages pap in containers to make a living, stirs reactions with his great business sense (photos) While some tweeps saw nothing wrong in the little’s work, others didn’t hesitate to express their displeasure over the photos, saying the child should be enjoying basic education.

“He’s already acquiring a skill and that’s a form of practical education so I don’t think his future is bleak, rather I see a bright future with a formal education which he can still acquire somewhere in the future.”

“This take is wrong, no matter what he wants to do, a basic education is required.”

@Juicelandlord reacted: “His parents failed him not Nigeria and not asuu.”

@bestman4allmen commented: “The guy is learning what he will become in life, Nigeria is not a country where u rely on collar job alone .. doing this doesn’t stops the boy from going to school….he is surely gonna become a great mechanical engineer.”

This 6yrs old boy works In a Mechanic Workshop here in Port Harcourt.

ASUU and Nigeria failed him💔 pic.twitter.com/z9pOaBdmAn

How's ASSU a participant of his failure?

ASUU failed him??? His parent nko?? I guess he's a final year student then… you should've just said Nigeria has failed all mechanics… like say no be legitimate work…