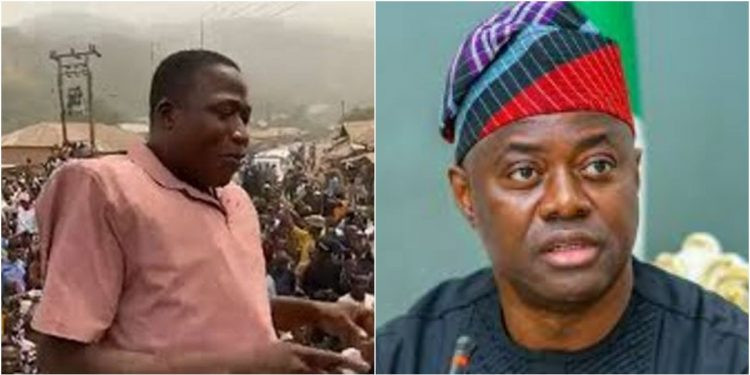 The man challenged Oyo Governor Seyi Makinde to arrest him if he can over the eviction order he issued to herdsmen last week.

Sunday Adeyemo, the Yoruba activist who is popularly known as Sunday Igboho, has dared the government.

The man challenged Oyo Governor Seyi Makinde to arrest him if he can over the eviction order he issued to herdsmen last week.

Ighoho had issued a seven-day ultimatum to Fulanis in Igangan in Ibarapa East local government to quit over alleged kidnapping and banditry.

But Makinde countered the order in a state broadcast, declaring nobody has the right to evict anybody from any parts of Oyo State.

Igboho however defied the order on Friday when he stormed Igangan with his supporters who vowed to flush herdsmen from every part of Yorubaland.

The hugely widely activist has struck a right chord in many Yoruba-born, who consider the presence of herdsmen a security threat.

The Governor and Igboho have been on a collision war after the latter dumped Makinde who he supported in the 2019 elections.

In a viral undated video, which emerged on Friday, Igboho blasted Makinde in Yoruba language.

Though he didn’t mention the Governor’s name, he said enough for viewers to know he was referring to Makinde.

He accused the Governor of backing herdsmen, recalling how Makinde relied on him to win votes in 2019.

According to him: “You can bring all Fulanis to Yorubaland, if you like, you unfortunate ones. It will not be well with you.

“You are threatening me in my fatherland with Fulanis. You will not prosper.

“Is it the Fulani’s that make the laws of the land? Have you forgotten when you were ‘bankrolling’ me when you wanted to become Governor and all I did for you all during the elections, and now you dare threaten me?

“Well, I don’t believe that you are serious with your threats yet, until you bring all the soldiers and policemen to arrest me in my house, before I know you are serious. You are all fools.”