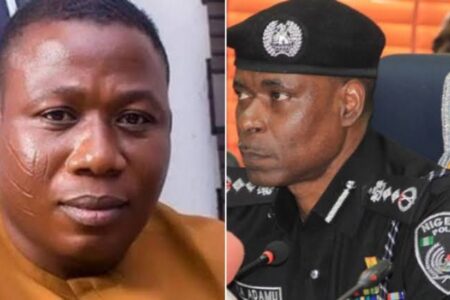 The Inspector-General of Police, Mohammed Adamu, has ordered the arrest of Sunday Adeyemo aka Sunday Igboho, over an eviction order on Fulanis in Oyo State.

The Senior Special Assistant to the President on Media and Publicity, Garba Shehu, confirmed this in an interview with BBC Hausa.

He told BBC Hausa the IGP told him on the phone order had been given to the Commissioner of Police in Oyo State, Ngozi Onadeko, to arrest Igboho immediately and transfer him to Abuja.

Igboho had ordered herdsmen in Ibarapa Local Government Area of Oyo State to leave within seven days, attributing the spate of banditry and killings in the area to them.

The activist was in Igangan in the Ibarapa North Local Government Area of Oyo State on Friday when Sunday Igboho and his supporters reportedly stormed the Fulani settlement in the town to eject the Seriki Fulani, Salihu Abdukadir, and some other herdsmen accused of fuelling security problems in the area.

Igboho had last week issued a seven-day quit notice to the Seriki and his associates.

Governor Seyi Makinde had ordered the Commissioner of Police to treat anyone fuelling ethnic tension as criminals.